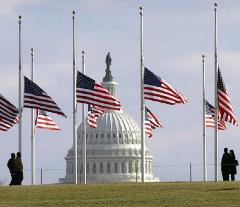 (December 4, 2018) - With the passing of President George Herbert Walker Bush, Congress has adjusted its schedule for the remainder of the year.

President Trump has declared Wednesday, Dec. 5th as a national Day of Mourning, with federal offices closed. The House of Representatives cancelled all votes this week, while the Senate delayed votes until Thursday and postponed hearings. As a result, Congress may stay in Washington longer that previously scheduled – as late as Dec. 21st – to wrap up the work of the 115th Congress.

Congress has several remaining items it must address before the end of the calendar year, most importantly passing a final Fiscal Year 2019 spending package by Dec. 7th. With outstanding funding issues to be resolved, including an ongoing fight over the border wall, Congress announced plans to pass a two-week funding extension that will allow until Dec. 21st to finalize a deal.

In the meantime, NACWA continues to push for our clean water priorities to be included in the final spending package. Also critical by the end of the year, Congress is working to pass a final 2018 Farm Bill. Congressional leaders announced last week that a final deal has been reached but are not releasing the language until the final “score” and bill report is complete. While NACWA has not seen the final bill, we understand it will include several important NACWA priorities and should offer strong support for conservation programs and improving water quality through a holistic watershed approach.

In the midst of finalizing these and other end-of-year must-pass bills, Congress is also in the midst of filling its leadership slots for the 116th Congress, and individual Members and Committees are identifying goals and priorities for next Congress. NACWA staff continues to monitor and engage with offices as this work advances and will report more in the coming weeks. Contact NACWA’s Legislative staff, Kristina Surfus or Jason Isakovic, to discuss.