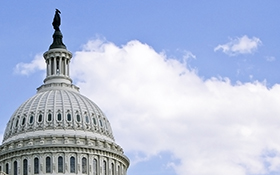 (May 1, 2018) - Congress has begun work on the Fiscal Year (FY) 2019 funding process, as both the House and Senate Appropriations Committees started scheduling budget hearings and receiving funding priorities from members and outside witnesses.

Chairman Richard Shelby (R-AL), the new Chairman of the Senate Appropriations Committee, has stated his intention to advance as many FY19 appropriations bills as possible by summer. Many Members of Congress are eager to avoid another government shutdown in October and subsequent omnibus spending bill. Congress is off to a good start since last year's two-year budget deal already set the "top line" numbers for FY19 spending.

Appropriations leadership is reportedly working quickly to “divvy up” this spending amongst the 12 subcommittees and reach agreement across the House and Senate. Once each subcommittee knows how much funding it has to work with, it can begin writing its bill in earnest. However, the Interior and Environment Appropriations Bill is usually one of the most politically contentious and is still not likely to be passed into law before FY19 begins on October 1.