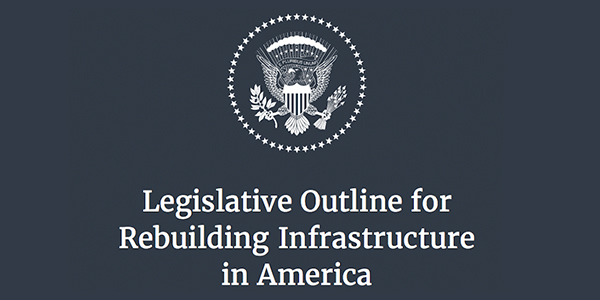 (February 13, 2018) – The White House released its long-awaited infrastructure proposal this week, which outlines the Trump Administration's framework for rebuilding overall infrastructure in America. NACWA is pleased that after several months of advocacy and discussions with the Administration, clean water was included as a key component of the proposal. However, we also have concerns about several of the provisions contained – or not included - in the plan as well as the level of federal investment given the growing funding gap for clean and safe water infrastructure

Some of the relevant plan details include:

NACWA is delving into each of these proposals further and will provide a more detailed analysis in the coming weeks.

The Administration’s proposal now must be taken up by the House and Senate and may be used to inform their efforts to craft legislation moving forward. NACWA will be at the center of this legislative effort, advocating to Congress for increased federal funding for the clean water sector.

The Administration also released its Fiscal Year 2019 (FY19) Budget Proposal. Much like last year’s White House budget, significant cuts were proposed for the EPA, along with agencies and programs, many of which are important to the clean water sector. NACWA is pleased to report that the budget does, however, recognize the importance of the Clean Water and Drinking Water State Revolving Funds (SRFs), as it maintains funding for the SRFs.

NACWA is mindful that the President’s Budget Proposal is just that: a proposal. The work now shifts to Congress, where NACWA will continue its advocacy as the House and Senate Appropriations Committees begin crafting FY19 spending bills, which are anticipated to vary significantly from the President’s proposal.

NACWA is currently reviewing both the infrastructure and budget proposals in greater depth and will provide members with further analysis and perspective in the coming days. In the meantime, please contact Kristina Surfus, NACWA’s Legislative Director, to discuss this further.