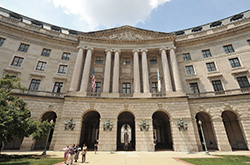 NACWA met with Andrew Sawyers, Director of the Office of Wastewater Management (OWM), and most of the office’s senior management on February 14, to discuss a range of issues, including water finance, stormwater and affordability.

A key focus of OWM right now is the Water Infrastructure Finance and Innovation Act (WIFIA) program, with EPA hoping to have a strong initial batch of “Letters of Interest” in response to its first Notice of Funding Availability.  The initial project selections should be made by June, and NACWA encourages members interested in the program to submit Letters of Interest.  NACWA and EPA also discussed the various proposals being considered to boost investment in the nation’s infrastructure, including an infusion into the State Revolving Loan Funds (SRFs), as well as a forthcoming paper from EPA on non-traditional project eligibility, including work in the stormwater arena.

EPA continues to work with the five communities it selected for funding and technical assistance to help them develop comprehensive, long-term management plans for stormwater.  EPA’s draft framework for this planning process is still out for public comment and NACWA’s Stormwater Management Committee will be developing comments. NACWA and EPA also discussed growing concerns over the affordability of water services and agreed that continuing the conversation on that issue will be important in the coming year.

NACWA held a second meeting February 15 with Betsy Southerland, Director of the Office of Science and Technology (OST), along with senior management from OST and OWM, to encourage the water office to more closely coordinate with the Office of Pesticide Programs (OPP), as OPP works to evaluate and approve pesticide uses.  As analytical capabilities continue to improve and water quality and stormwater regulations get more stringent, utilities will increasingly face challenges meeting chronic toxicity requirements and other limits due to the presence of pesticides in their discharges.  This is already an issue for NACWA members in California.  While OPP regularly considers “down-the-drain” impacts of pesticides, they often focus their efforts and analysis on those areas where the greatest perceived risk exists, which is often not the down-the-drain pathways.  There will need to be an ongoing conversation with EPA’s water and pesticide offices on this issue, but this initial discussion was intended to raise the level of awareness within the Office of Water.