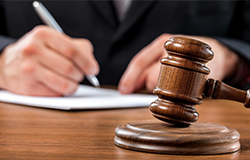 Last week, a divided Iowa Supreme Court upheld a state legal doctrine that protects agriculture drainage districts from certain lawsuits.  This state court decision stems from litigation brought in federal district court by Des Moines Water Works (DMWW), a regional drinking water utility, in March 2015 to address the discharge of nitrates from agricultural sources into the Raccoon River. This river is one of two sources of drinking water for approximately half a million people in the Des Moines, IA, metro area.

In the litigation, DMWW alleges nuisance, trespass, negligence, taking without just compensation in violation of the United States and Iowa Constitutions, due process and equal protection violations, and violations of the federal Clean Water Act (CWA) and Iowa state law.  The utility argues that the nitrates in the rivers come from artificial subsurface drainage systems (e.g., tile drains) associated with agricultural operations and fertilizer application. DMWW contends that rainwater that infiltrates into the groundwater is no longer agricultural stormwater or irrigation return flow, and, therefore, not exempt under CWA §502(14).  The utility further argues that the discharges from the tile drains and ditches into the rivers are point source discharges of pollutants, in violation of CWA §301(a) and require NPDES permits.

Early last year, the federal district court judge overseeing the case issued a partial stay on discovery, pending resolution by the Iowa Supreme Court of the common law damage claims asserted by the drainage districts and that are governed by Iowa state law. The federal court concluded that, given the public importance of the case it described as “one of first impression,” certification was appropriate to enable the Iowa Supreme Court to decide the questions under state law. In doing so, the federal court candidly acknowledged that without certification of state law questions to the Iowa high court, it “would have to reject the thoughtful, creative, novel and well-argued positions of DMWW as unsupported by Iowa law.”

In its recent ruling, the Iowa Supreme Court held that the drainage districts are immune from suits for damages and injunctive relief under state law. The court went on to explain that lawmakers could decide whether the costs of removing nitrates should be shifted from DMWW ratepayers to farmers. The ruling is being hailed as a victory for Iowa agriculture, because it will continue to restrict the ability to recover monetary damages from upstream agricultural operations that contribute pollution affecting downstream entities. The matter returns to federal court for further proceedings. If the federal judge dismisses the state claims as expected, DMWW still has federal claims pending including the question of whether the drainage districts must obtain NPDES permits. A trial on the federal issues is scheduled for June, 2017.  NACWA will continue to track the federal litigation and report any developments.