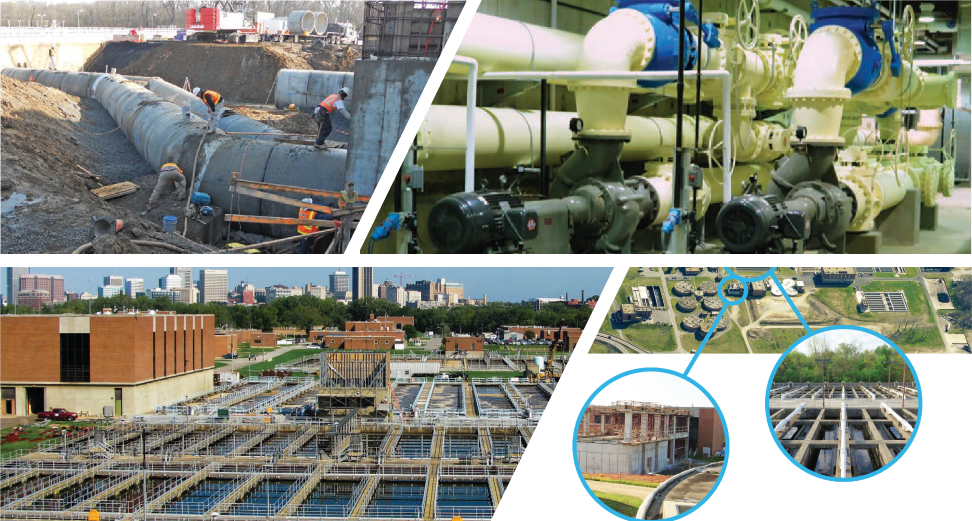 By following their goal of improving water quality while maintaining affordable rates, the City began a multiphase upgrade to the wastewater treatment plant that would reduce nutrient discharges, as well as continue to reduce bacteria. At the same time, capacity for future upgrades was maintained to continue implementation of the City’s long-term plan for combined sewer overflow control. The improvements included enhanced phosphorus removal, methanol addition for nitrogen removal, effluent filtration, primary sedimentation, aeration, final sedimentation, and ultraviolet disinfection.

The initial focus of the project was to address Virginia’s requirements to reduce nitrogen and phosphorus discharges and prepare the City for necessary reductions in the Chesapeake Bay Total Maximum Daily Load (TMDL). It was also necessary to weave these upgrades into long term planning that would address necessary combined sewer overflow program projects. There were multiple priorities, but all had the same endpoint of improved water quality which had to be balanced against the need to keep customer rates affordable.

Richmond’s goal was to reduce nutrients to meet the Chesapeake Bay TMDL, but after all the construction was done and the plant completed its optimization phase, its performance was better than expected. Using 2010 as the baseline year, the wastewater plant discharged 2,400,000 pounds of total nitrogen and 69,000 pounds of total phosphorus. In 2018, the City projected the total nitrogen discharge to be 330,000 pounds and total phosphorus 15,000 pounds. This meant the plant had reduced total nitrogen discharges by 87% and total phosphorus discharges by 82%. Each year the Commonwealth does an accounting of performance of all dischargers in the state to reconcile efforts to meet its allocation for the Chesapeake Bay TMDL. The Richmond wastewater treatment plant was consistently among the highest performing in the area.

Even though Richmond’s goal was to meet its obligation under the Chesapeake Bay TMDL, the plant operation focused on performance to reduce the loads as much as possible, to go beyond compliance. This was important not only to meet permit limit obligations but to meet expectations of rate payers. The total cost of all the upgrades was approximately $120 million. Funding came from rate payers, the state water quality improvement fund as well as state revolving loan funds. The rate payers made a large investment in the plant upgrades and the reductions demonstrate the benefits related to those investments. The benefits to the plant also directly link to benefits in the James River and ultimately the Chesapeake Bay. The James River is noted for being one of the best urban whitewater rivers in the US and draws considerable tourists to Richmond for recreation in or near the river. Today the river is healthier than ever - recently baby sturgeon have been counted in local waters – a fish long thought gone from its historic home.