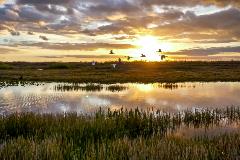 (February 19, 2019) - EPA and the Department of the Army’s proposed rule narrowing the definition of Waters of the United States (WOTUS) was finally published in the Federal Register on February 14.

This begins a 60-day public comment period that will close April 15, but it is likely the comment period will be extended. Both the House and Senate sent letters to EPA and the US Army Corps of Engineers seeking an extended comment period.

Publication of the proposed rule is step two in a process that first repealed the 2015 Obama Administration Clean Water Rule. The Trump Administration’s new definition is intended to increase predictability and consistency of Clean Water Act permitting.

The proposed definition makes several revisions including omission of the significant nexus theory. It also redefines navigable waters, tributaries, adjacent wetlands, lakes and ponds, ditches, and adds “a typical year” and “upland” definitions to help clarify stream flows as well as man-made excavations. To see some of the definitional revisions to WOTUS pertinent to the municipal clean water community, see this comparison of the 2015 Clean Water Rule and the new proposed definition.

NACWA provided initial feedback in 2017 on EPA’s effort to redefine WOTUS.  The Association is pleased to see important exclusions carry over from the 2015 Clean Water Rule to the new proposed rulemaking for wastewater treatment systems and stormwater control features. It is longstanding Agency practice to consider both of these as non-jurisdictional waters.

NACWA discussed the proposed rule during its recent 2019 Winter Conference in Albuquerque, NM and will be submitting comments on the proposal. More information regarding NACWA’s comment development process and how it plans to assist member utilities with their comments will be announced soon.  In the meantime, if members have questions on the definitional changes or have thoughts on NACWA’s WOTUS efforts, please contact Emily Remmel, NACWA’s Director of Regulatory Affairs.