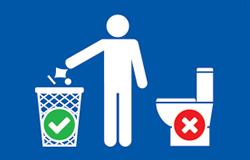 The Maryland House of Delegates, Economic Matters Committee held a hearing on House Bill 1239, Nonwoven Disposable Products – Advertising and Labeling, on March 15.  The bill is identical to the one passed by the Maryland Senate on March 10 by a vote of 34-12 and is modeled on the first “wipes legislation” in the country—the District of Columbia’s Nonwoven Disposable Products Act of 2016.  Both the DC legislation and the Maryland bill address flushability standards for flushable wipes, and “Do not flush” labeling for non-flushable wipes.

The Economic Matters Committee voted unanimously on March 16 to refer the bill to interim study.  Although the status of the bill is unclear at this point, NACWA will continue to work with the Metropolitan Washington Council of Governments, the Maryland Association of Municipal Wastewater Agencies, and the Chesapeake Water Environment Association to support this legislation.