Jun 28, 2021
The city’s stormwater management programme has seriously reduced the risk of combined sewer overflow events in the decade since it was launched. As it starts work on a second stage of the project, the city’s water utility will need buy-in from its commercial customers.


Since 2010, New York City’s Department of Environmental Protection (NYC DEP) has invested $1 billion toward green infrastructure, with the aim of managing its stormwater and reducing combined sewer overflow (CSO) events – when excess stormwater, mixed with sewage, saturates the sewerage system and is discharged untreated. So far, NYC has installed over 11,000 green infrastructure assets and has thousands more in the planning or early implementation stages. These assets, which include rain gardens, infiltration basins and permeable pavements, harness the power of greenery and infiltration to absorb excess rainwater and keep it out of the sewers. The installed assets currently help reduce CSO by approximately 500 million gallons a year compared to the picture a decade ago.

NYC DEP is now looking to ramp up the involvement of the private sector as it accelerates the rollout of its Green Infrastructure programme to achieve its goal of reducing CSO by 1.67 billion gallons a year by 2030. The new Private Property Retrofit Incentive Program, run by contractor Arcadis under a five-year contract, is set to launch at the end of this month. Using designs developed by DEP, Arcadis will deal directly with private owners to install stormwater management systems on large properties and receive a flat rate from the city per ‘greened acre’ it constructs. The greened acre metric is used by DEP to convey the volume of stormwater and impervious area managed by green infrastructure installations. A greened acre represents the depth of stormwater runoff from an impervious acre, which for typical NYC green infrastructure practices, is between 1-2 inches. DEP expects this large-scale incentive programme will create 200 greened acres over five years in addition to the 1,506 greened acres created in NYC so far. “We’re hoping it will be widely successful because if they go get the bigger properties with the bigger parking lots, they can offer them a new parking lot for exchange of [stormwater] storage underneath that parking lot, it’s a win-win,” said Angela Licata, deputy commissioner for sustainability at NYC DEP. She added more needs to be done to encourage private investment and warned the Green Infrastructure programme could not achieve its goal without input from private property owners. As well as the upcoming incentive programme, NYC runs a grant programme to encourage green roof retrofits, and offers a tax abatement for properties that install green roofs. The city will also soon be reinforcing regulatory requirements for stormwater management for new builds in the city, thanks to amendments proposed by DEP. 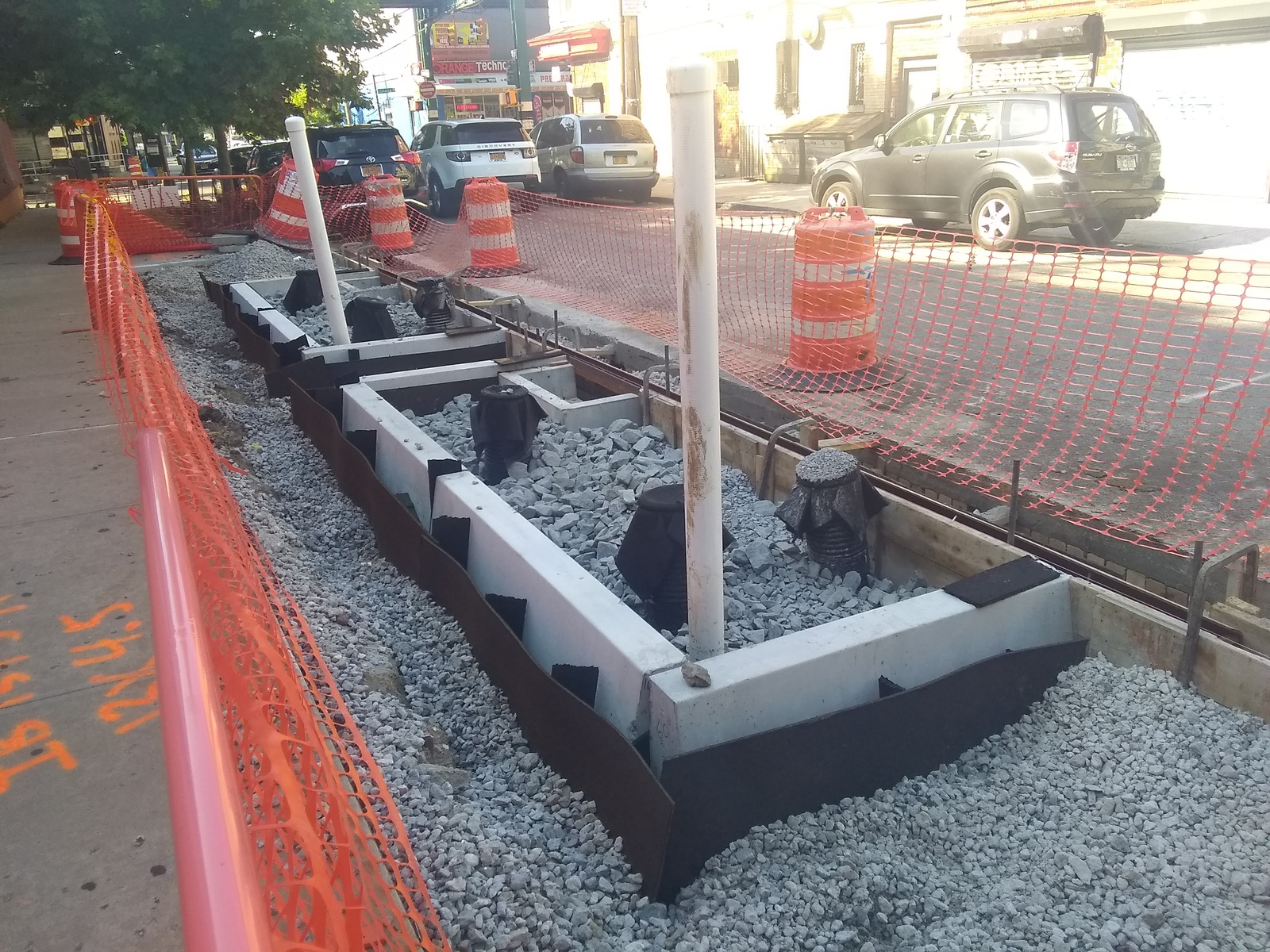 STORAGE BENEATH THE SIDEWALK
The installation of infiltration basins under roads and pavements allows for the storage of significant amounts of stormwater.
Source: NYC DEP


Reducing CSO is one of NYC’s main challenges when it comes to stormwater management. But the brute-force method of increasing the capacity of the sewerage system by building ever-bigger tunnels proved to be unsustainable. Although the initial price for this “grey” infrastructure was low, prices were set to increase significantly once the low-hanging fruit – an investment of $4.6 billion in grey sewer infrastructure – had been plucked.

“When we started to look at what additional CSO control would look like for grey infrastructure, we realised that we were coming up against the law of diminishing returns: we were going to be spending quite a bit more and it was going to take us a very long time to do deep tunnels,” said Licata. The price of green infrastructure on the other hand would remain level at around $1 to $3 on average. What’s more, small-scale green infrastructure can be installed quickly and start collecting stormwater right away, whereas a deep-tunnel project may take decades to come to fruition. According to Licata, the relative rapidity with which green infrastructure can be installed was one of its strongest selling points.

Right-of-way, meaning streets and pavements, represent roughly 30% of all impervious surfaces in the city and have been the strongest focus for the programme so far, making up 90% of implemented greened acres. “We consider right-of-way the low-hanging fruit because it is easy to access that area, we just have to work with the Department of Transportation for siting criteria and we could develop ‘stock designs’ […] we weren’t designing individually per site,” said Licata. These assets, which are mainly rain gardens and infiltration basins, are not simply a stretch of greenery, but “quite engineered in the sense that you have five feet of engineered soil, it’s very specifically structured soil and rock to allow for infiltration” according to Licata. 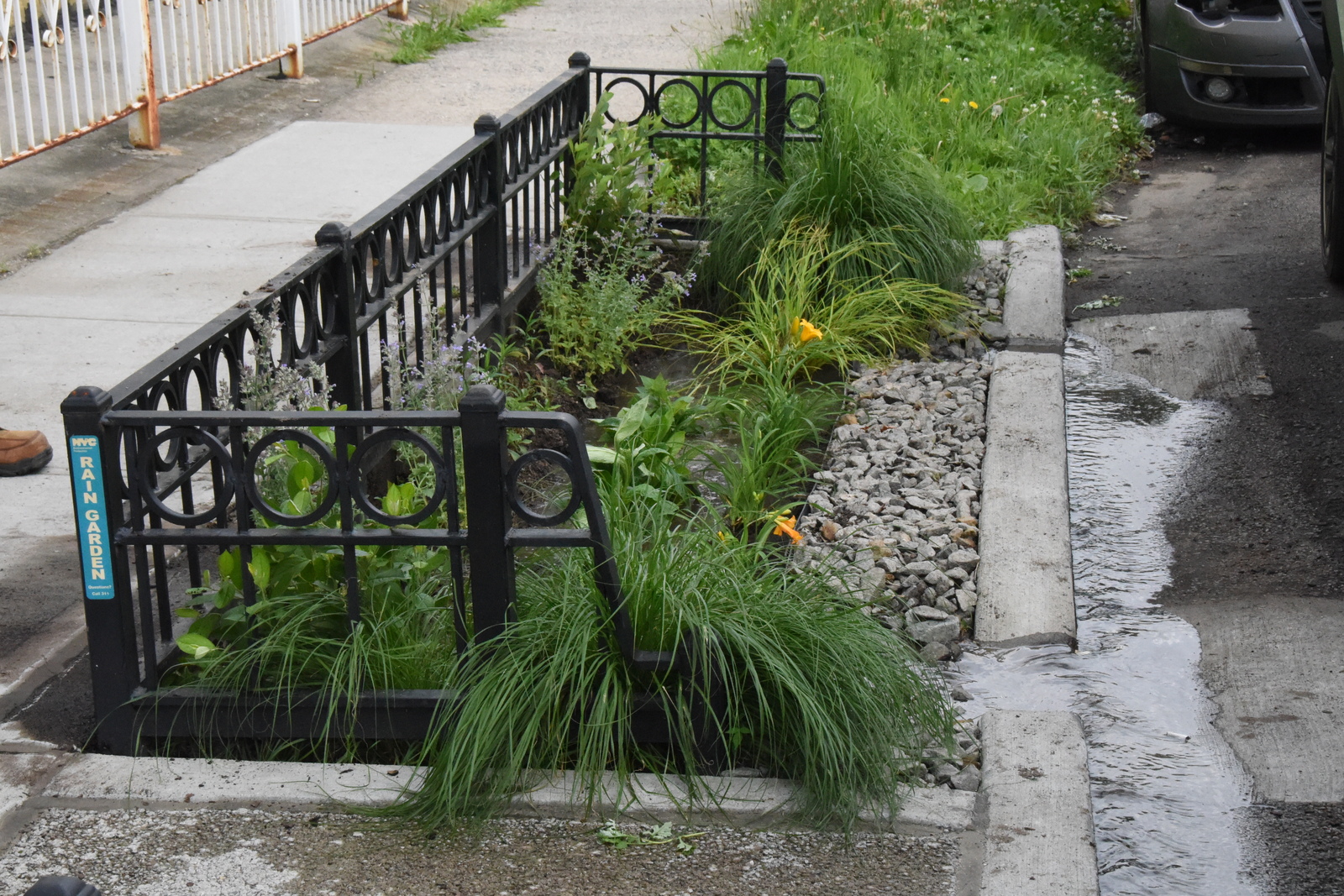 BUILDING THE GARDEN CITY
Rain gardens brighten up the streets but also act as an important part of the city’s Green Infrastructure programme by trapping stormwater.
Source: NYC DEP

Although they garner the most attention, rain gardens are not the only part of the plan. “We are facing the reality that very green doesn’t work everywhere,” said Licata. “In a commercial area you can plant all you want, but the trucks will run right over it. So we also realised that we needed to look at more of the fabric of the neighbourhood and be realistic.” In some areas, it was more effective and sustainable to install infiltration basins: an area of similarly engineered soil for infiltration, but without the planted garden on top.

Thanks to the success of these neighbourhood installations, ambitions are running high at the utility. Inspired by the Danish Cloud Burst programme, the city is looking at more tailored designs for larger roads. “We believe there is a tremendous opportunity for climate resilience because in those great big spaces we can do more than 1-inch capture. We can try to get to 2.5 inches on those,” said Licata. “They do require more specific designing […] we have an in-house design group and we are innovating and learning on the go.”

She added she wants to work more intensely on larger public property projects, meaning parks, schools and city housing estates, which provide an opportunity for increased stormwater capture. The conversion of New York’s asphalt playgrounds – famous from West Side Story – into green infiltration locations has been one of the great successes of the programme according to Licata, who said: “We’ve been surprised about how great the school yard projects have been […] We have been able to work to transfer these spaces by allowing for the investment in AstroTurf. Then underneath is your subsurface detention system and some of those hold almost 1 million gallons of storm water per year and are often able to take water from the surrounding streets and make sure that they almost never deliver water to the sewer system.” 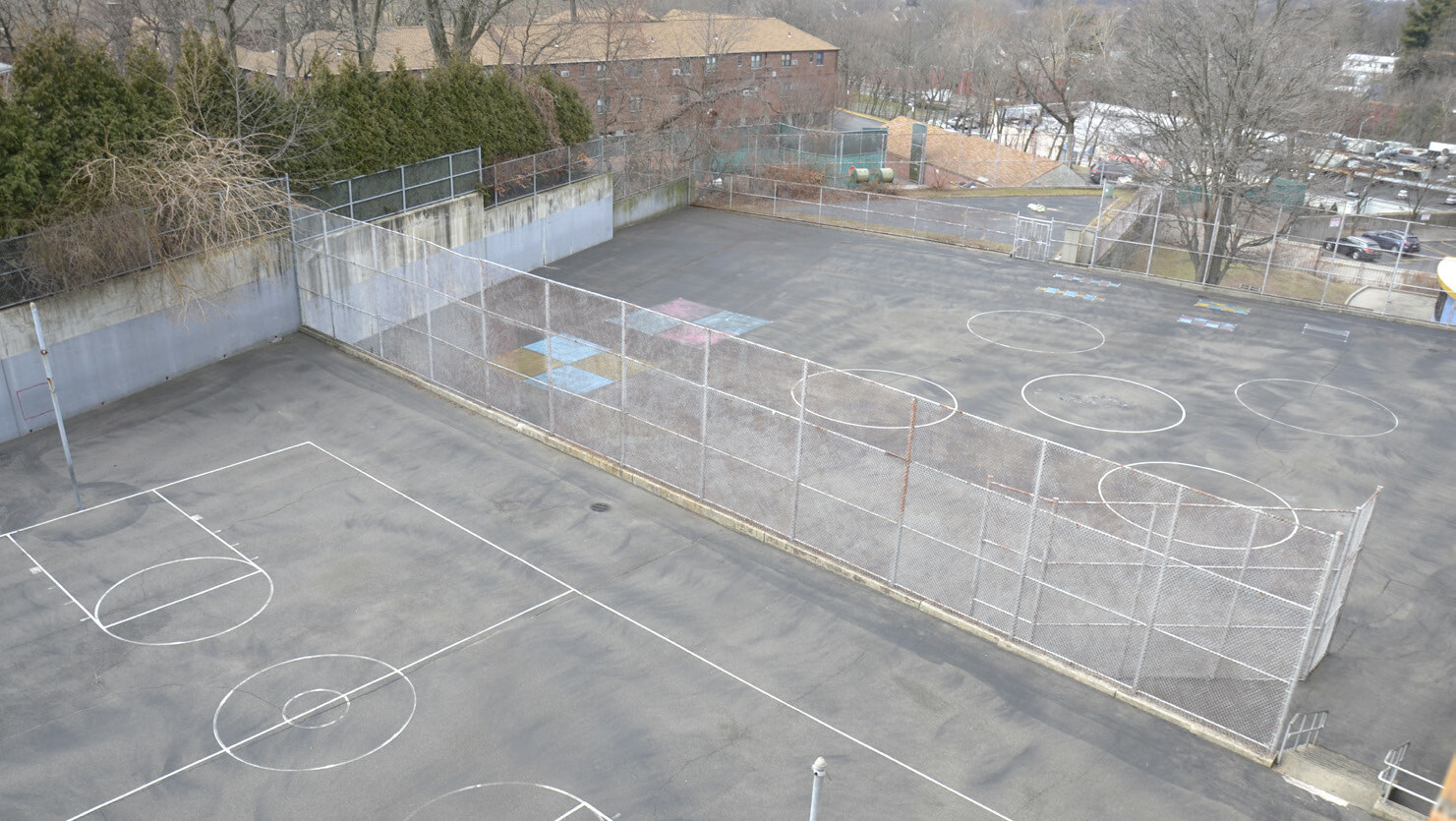 One unexpected challenge DEP had to face was sizing and timing contracts to get good prices from construction contractors. “We really struggled initially to get good prices and we thought the prices would calm down as the contractors become more familiar and we standardised more of the designs,” said Licata. However, prices unexpectedly continued to increase, and contractors explained that because DEP was releasing large batches of contracts at one time, saturating the construction workload, prices went up. “What we were able to do is get into more of a rhythm where they could then give us the best prices because they could continuously use the same crews,” said Licata. “It was a matter of pacing the market and that really has had a tremendous impact on the cost. We’re really quite pleased at the latest bids that we’re getting. It has been great for affordability.” 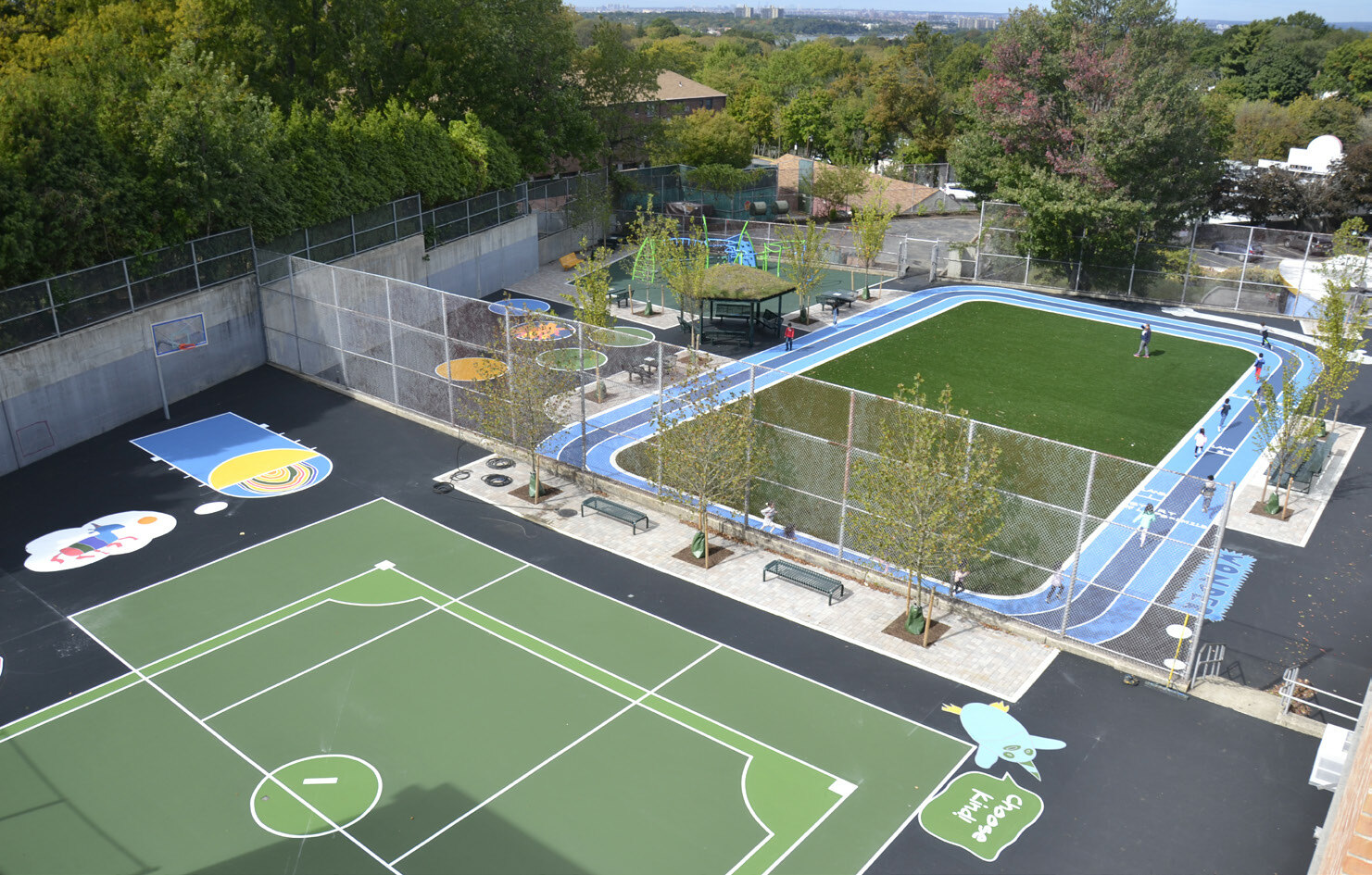 ...AND AFTER
The greening of yards has made the view more attractive as well as contributing to the management of stormwater and combatting combined sewer overflows, the NYC DEP has said.
Source: Trust for Public Land

The Green Infrastructure programme has proved its merit in reducing the volume of stormwater flowing into the sewers, and so preventing wastewater treatment plants from being saturated with stormwater and overflows from contaminating the watershed. But Licata emphasised that it also has a wider scope, saying: “It makes it a liveable city, it makes the city more desirable,” and pointing to the greening of streets, playgrounds and schoolyards which were almost all grey previously. Green spaces also contribute to reducing the heat island effect, the phenomenon where heat trapped in buildings and roads makes urban areas hotter than natural landscapes. Rain gardens also present an opportunity for pollinators, as the DEP strives to use local plants. These are all increasingly important considerations in the context of global warming and eco-system destruction. “Ultra-urban settings really demand a more environmentally friendly approach,” said Licata. “The other alternative is to get greyer and greyer and that just seems more dismal and desolate to me.”

The election of President Biden marked a new era of federal focus on both infrastructure and the fight against climate change in the US. Water utilities have long been aware of the importance of safeguarding their infrastructure against increasing climate-change related weather events. With the prospect of long-needed investments in infrastructure, making the right choices to ensure long-term resilience is more crucial than ever. In that regard, New York City’s Green Infrastructure programme could be at least part of the answer.

The views expressed in this resource are those of the individual contributors, and do not necessarily reflect those of NACWA.