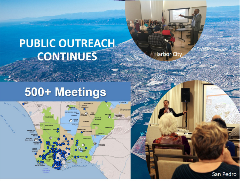 The Sanitation Districts of Los Angeles County operates and maintains the Joint Outfall System (JOS), Los Angeles County’s main sewer system, and collects and treats the wastewater from over 5 million people in the Los Angeles basin. The Joint Water Pollution Control Plant (JWPCP) is the largest wastewater treatment facility in the JOS. A critical component of the JOS is a tunnel and outfall system that conveys treated water from the JWPCP to the ocean.

In 2012, the Sanitation Districts’ Board of Directors approved the Clearwater Project to protect local waterways by addressing aging critical infrastructure. The project is the result of a multi-year planning and environmental review effort that began in 2006. Under the project, a tunnel boring machine will construct a new 7-mile long, 18-foot diameter tunnel to convey clean water from JWPCP to existing ocean outfalls at Royal Palms Beach. The project will ensure the reliability and future capacity needs of the main sewer system.

Massive infrastructure projects require significant community outreach to garner public support. For the Clearwater Project, the Sanitation Districts and outside consulting firms developed a comprehensive outreach and community engagement program. This outreach program was integrated into the project from the outset. Since 2006, the Sanitation Districts have held over 550 community meetings and used social media, a dedicated website, a 24-hour hotline, brochures, video, and newsletters to engage the public. The input from this outreach helped shape the project, which has resulted in support from community leaders, from the time of the project’s inception through the current construction phase.

The outreach program continues today as construction proceeds. The proactive public outreach has enabled the Sanitation Districts to serve their community better. They are committed to continuing their efforts through the completion of the Clearwater Project in 2026.