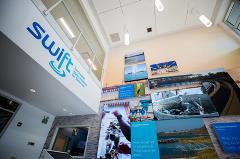 This year, the Hampton Roads Sanitation District (HRSD) launched the Sustainable Water Initiative for Tomorrow (SWIFT) Research Center.  As the first of its kind, the center is an advanced water treatment, aquifer recharge, public education, aquifer science research, and operator training facility all rolled into one.  The one million gallon per day facility takes a portion of the fully treated effluent from HRSD’s Nansemond Treatment Plant and uses an 8-step carbon based advanced water treatment process to produce water that meets drinking water standards (SWIFT Water).  The SWIFT Water is then used to recharge the Potomac Aquifer, a confined drinking water aquifer that supplies water to over 200,000 individual drinking water wells throughout eastern Virginia.

The SWIFT Research Center’s primary purpose is to demonstrate, at scale, the ability to successfully recharge the Potomac aquifer with water sourced from a wastewater treatment plant.  Data obtained from the treatment process, as well as surrounding monitoring wells, will be used to demonstrate the SWIFT process is protective of public health and the long-term viability of the Potomac aquifer as a drinking water source supporting eastern Virginia.

Another potential benefit from SWIFT is the slowing, stopping, or reversing of the aquifer compaction portion of land subsidence in eastern Virginia.  The net sea level rise in eastern Virginia includes the effects of land subsidence, producing some of the most significant net sea level impacts in the United States.  The USGS estimates that as much as half of the land subsidence is due to aquifer compaction, the result of over pumping for more than 100 years.  Modeling indicates recharge by SWIFT may restore the top of the aquifer to pre-pumping elevations.  To gauge this impact, HRSD partnered with the USGS to install an extensometer approximately 500 yards from the SWIFT Research Center recharge well.  Early data indicate there is a measurable impact of SWIFT recharge on the compaction of the aquifer, but it is too soon to know if SWIFT will be successful in restoring lost elevation over a large area once at full scale (100 mgd).

The SWIFT Research Center has lived up to all expectations through the first six months of operation. The aquifer has been successfully recharged with over 50 million gallons of water, more than half a dozen operators have been trained to run the advanced water treatment processes, and countless samples and analyses have been conducted to provide critical data required to support full scale implementation.