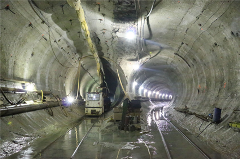 NACWA Member Agency, Citizens Energy Group, created a 360-degree virtual reality video about the largest public works project in the history of the City of Indianapolis—the DigIndy Tunnel System. The video was created to promote public awareness for the $2 billion project, which will cause disruption, including road closures and detours, during the project and inevitably impact rates for the community.

With 360 degree viewing capabilities, the virtual tour takes the viewer 250 feet underground, displaying the inside of the tunnel while providing educational pop-up facts along the way. In just over three minutes, the video explains the necessity of the tunnel–to capture the excess stormwater and wastewater the city’s combined system cannot adequately collect after even a quarter inch of rainfall. By learning about the wastewater collection and treatment process, viewers will gain a better understanding of what is involved in protecting our vital water resources. . To date, the first 10 miles of DigIndy have prevented more than 650 million gallons of sewer overflows from entering local waterways.

The DigIndy 360 VR Tour has been viewed nearly 11,000 times on YouTube and has been used as an educational tool at countless public events. The virtual reality tour was also recognized with a 2019 NACWA National Environment Achievement Award for Public Education.