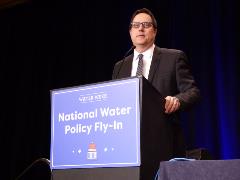 Dave Ross, Assistant Administrator for the Office, kicked off the program by stressing the value of the partnership EPA has with the water sector, and thanking the audience of water professionals for all the work they do to protect human health and the environment.  Noting the activity of his office directors in managing a number of rulemakings and other initiatives, Ross chose to highlight three non-regulatory programs as the top issues on his mind at the moment. At the top of the list was water reuse.

EPA has been working to develop a Water Reuse Action Plan, which it hopes to release in September, and Ross stressed his interest in accelerating efforts in this space, using the federal government’s funding power. Ross also stressed that the Action Plan would not dictate “how you do” reuse, but instead seek to remove barriers and incentivize more work in this area.

In highlighting his second top issue, water workforce, Ross thanked the “silent heroes” that work every day operating the nation’s water and wastewater utilities. He noted a few of the initiatives EPA has underway already, including working with the Veterans Administration to recruit workers, but also that EPA was “close, but not ready, for an announcement on a coordinated federal initiative” on water workforce.

Finally, Ross highlighted his personal interest in increasing coordination among the federal family on water issues, noting the formation of a “water cabinet,” with the goal of leveraging their collective resources together to advance work in the water space. Following Ross’ remarks, leaders from the Office of Water’s four main offices provided a more detailed look at the work they have underway, including a rulemaking on peak wet weather flows (blending)—with a proposal expected by the end of 2019; development of recreational criteria for coliphage—with external peer review expected in 2020; work on evaluating the risk of PFAS in biosolids and in drinking water, and more.