Trump Calls for Infrastructure Investment in State of the Union 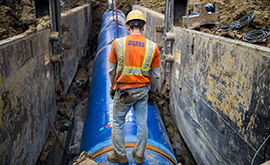 (February 6, 2019) – President Trump called for a broad infrastructure investment package in his State of the Union address last night, again raising the possibility of an infrastructure bill that could gain bipartisan support.

Infrastructure has long been viewed as an area where the President and Congressional Democrats could find common ground, and senior Democratic leaders in the House have already signaled their interest in pursuing infrastructure legislation with their new majority.  The full House Transportation & Infrastructure Committee will be holding its first hearing this week with an exclusive focus on the need for more infrastructure investment (see related story).

While the President offered few details on his infrastructure plans, NACWA has already been engaged with Congress and other water sector partners to ensure any infrastructure package includes water as a major component.  Given the significant bipartisan support in the last year for water issues, including the Water Resources Develop Act and Integrated Planning legislation, there is a good foundation to build on in pushing for more water infrastructure investment.  The Association will continue its advocacy efforts and keep the membership updated.