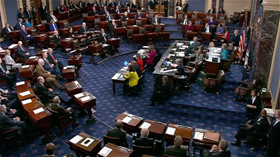 (October 9, 2018) – The Senate is expected to vote as early as today on the 2018 Water Resources Development Act (WRDA), S.3021, advancing the bill to the President’s desk for signature.  The House passed the bill with an overwhelming bipartisan vote last month, and the measure is expected to easily clear the Senate with similar bipartisan support.

Entitled America’s Water Infrastructure Act of 2018, this year’s WRDA authorizes individual US Army Corps of Engineers (USACE) water resources projects, and also includes a number of changes to the Safe Drinking Water Act and the Clean Water Act.  A WRDA bill is normally passed every two years, and in recent years, Congress has expanded its scope to address municipal water infrastructure issues as well. NACWA has been working with both the House and the Senate to secure inclusion of provisions in S.3021 that are important to the clean water sector.

Further, the bill includes language establishing a pilot program for EPA to work with utilities on developing water workforce training programs, with an authorization of $1 million for each of the next two fiscal years to support grants for water workforce programs.  Also included is the creation of an EPA task force, which will include local government representation to study and provide recommendations on how to address stormwater funding and financing. Additionally, language that NACWA championed along with the WateReuse Association was included to improve coordination between the USACE and local communities on water management plans.

NACWA will be sending out a detailed analysis of the bill to all members later this week.  In the meantime, please contact Kristina Surfus or Jason Isakovic, NACWA’s Legislative Directors, with any questions.