Congress Back to Work with Busy September Agenda 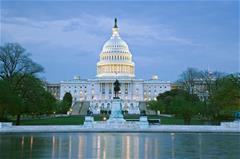 (September 11, 2018) – With the November mid-term elections now less than two months away and only a handful of legislative days left before Congress leaves Washington to head back home for the final stretch of the campaign season, September will be a busy month in both chambers.

The House and Senate have been pre-conferencing the 2018 Water Resources Development Act (WRDA) in recent weeks and are hoping to negotiate a final bill that can pass both chambers and be signed into law. A draft version of the bill was released late last night (see related story below) and NACWA is in the process of reviewing the bill.

Also last week, formal conferencing got underway on the 2018 Farm Bill. However, significant policy disagreements remain between the House and the Senate, including reforms in the House bill to the Supplemental Nutrition Assistance Program (SNAP), and issues regarding the effects of commodity programs on the federal budget.

Agriculture Committee Chairmen Sen. Roberts (R-KS) and Rep. Conaway (R-TX) and Ranking Members Sen. Stabenow (D-MI) and Rep. Peterson (D-MN), who are leading the conference negotiations, have committed to continue working together to hash out the differences and remain optimistic they will get a bill done before the end of the year. However, since the current Farm Bill authorizations expire Sept. 30th, a short-term extension will likely be passed in the coming weeks.  NACWA is continuing to work with members of the conference committee and their staff to ensure that key NACWA priorities remain in the final bill.

Additionally, Congressional Appropriators continue working on the Fiscal Year 2019 (FY19) appropriations process as the end of the fiscal year - September 30th - nears.  Versions of the Interior, Environment, & Related Agencies bill, which funds EPA, passed through the House and Senate and Congress has begun conferencing their many differences.

However, disagreements over funding levels and policy riders are unlikely to be resolved before the end of the month, making a continuing resolution (CR) likely which would extend government funding in November at current levels.  NACWA is continuing to work with appropriators and members of the conference committee to ensure that any FY19 appropriations measure provides strong federal funding for clean water infrastructure investment.

Lastly, after several days of confirmation hearings before the Senate Judiciary Committee last week, a final vote on Supreme Court nominee Brett Kavanaugh is expected to come to the Senate Floor in the coming weeks.  It is believed that Senate Republicans have the 51 votes needed to confirm Judge Kavanaugh to the Supreme Court.