Congress Works to Finalize 2019 EPA Funding by End of September 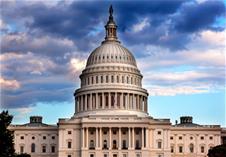 (August 14, 2018) - The Senate passed its Fiscal Year 2019 (FY19) Interior, Environment and Related Agencies Appropriations bill earlier this month, marking the first time in more than a decade that the bill has been passed by the Senate outside of a year-end “omnibus” process. The Environment Appropriations bill funds the EPA and other agencies and contains a number of NACWA funding priorities.

The Senate-passed bill maintains total EPA spending at a level equal to Fiscal Year 2018 ($8.824 billion) and secures strong bipartisan support (92-6 vote in favor) through a shared commitment to not include contentious environmental policy riders and funding cuts. The Environment Appropriations bill was passed alongside FY19 Appropriations bills for Agriculture, Transportation, Housing & Urban Development, and Financial Services.

The House passed its version of the FY19 Interior, Environment and Related Agencies bill earlier this summer. In contrast to the Senate, the House bill includes controversial environmental policy riders, and reduces total EPA funding by $100 Million. The House bill passed on a partisan vote (217-199), with all House Democrats and 15 Republicans opposed.

With respect to water funding and financing, the Senate bill is stronger. The Senate provides a total of $1.6941 billion for the Clean Water State Revolving Fund (CWSRF) and $1.164 billion for the Drinking Water State Revolving Fund (DWSRF). Crucially, these Senate numbers maintain the strong increases that the SRFs saw as part of an “infrastructure investment down payment” in FY 2018 – specifically a $300 million increase per SRF, which reflects a more than 20% jump. In contrast, the House bill splits the difference between FY18 and earlier years, providing $1.544 billion for the CWSRF and $1.013 Billion for the DWSRF. NACWA will be advocating for the Senate’s number to be maintained in any final conference bill.

The House’s bill provides stronger funding for the Water Infrastructure Finance and Innovation Act (WIFIA), allocating a total of $75 Million for FY19, compared to $63 Million in the Senate. EPA grants to States (Sec. 106 and Sec. 319) are the same in both bills—which are level with FY18.

While the House and Senate bills vary, NACWA remains optimistic that they can be reconciled with strong funding for water programs by the September 30 fiscal year deadline. There is significant Congressional interest in completing these bills to avoid a government-wide funding extension, or threat of shutdown in October of an election year. During floor debate of the Senate bill, Senators from both sides emphasized the importance of the SRFs and WIFIA in improving water quality around the country.

As work to conference the bills proceeds, NACWA will continue advocating for a strong final package for water, and recently sent a letter to the Appropriators. Considering that Congress has not yet passed a much-promoted comprehensive infrastructure investment package, continuing strong funding through existing programs is critical.