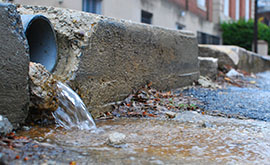 (July 17, 2018) – EPA published a supplemental notice last week in the Federal Register providing additional clarification and reasoning for its repeal of the 2015 Clean Water Rule.  EPA originally noticed its intent to repeal the Clean Water Rule in July 2017.  The supplemental notice is being issued, according to EPA, “to clarify, supplement and give interested parties an opportunity to comment on certain important considerations and reasons” for withdrawal of the 2015 rule.

EPA is following a “two-step” process for crafting a new regulation to govern which waters are jurisdictional under the Clean Water Act (CWA).  The first step is to withdraw the 2015 rule, and this recent supplemental notice is part of that process.  The second step will be to propose a new regulation to replace the 2015 one.  EPA currently has a draft of the new regulation at the Office of Management and Budget (OMB) for review and is expected to publish it in draft form for comment later this year.

NACWA previously submitted comments to EPA making clear that existing CWA exclusions for wastewater treatment and stormwater management systems must be included in any new regulation.  NACWA looks forward to reviewing and commenting on EPA proposal when it is released.