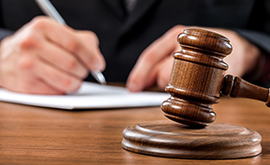 (May 15, 2018) - The US Court of Appeals for the Fourth Circuit heard oral arguments May 8 in Ohio Valley Environmental Coalition (OVEC) v. Pruitt, a case involving the issue of constructive submission of total maximum daily loads (TMDLs) by the West Virginia Department of Environmental Protection (WVDEP).

At oral argument, the three-judge panel appeared divided, with Judge Henry F. Floyd - who authored the dissent in the Fourth Circuit’s recent decision in Upstate Forever v. Kinder Morgan - representing the likely swing vote.  Judge Paul V. Niemeyer asked extensive questions of OVEC, focusing on WVDEP’s submittal of thousands of TMDLs, and the fact that the standard for constructive submission is very narrow, such that the doctrine applies only where a state has clearly and unambiguously refused to submit any TMDLs.

Judge Diana Gribbon Motz focused most of her questions on EPA, with an emphasis on the state’s obligation to submit TMDLs.  Judge Gribbon Motz also expressed concern that neither the Clean Water Act (CWA), nor the agreement between WVDEP and EPA, impose a legally binding schedule for completion of the TMDLs.  Judge Floyd asked very few questions, asking only about the status of the West Virginia Senate bill requiring WVDEP to develop a new methodology to develop the TMDLs.

NACWA filed an amicus curiae brief in the case in July 2017, in cooperation with the National Mining Association and the National Cattlemen’s Beef Association. NACWA’s brief lends support to EPA’s position that the district court erred in applying the constructive submission doctrine, arguing that the CWA does not provide for the constructive submission doctrine at all, and supporting states’ discretion to address TMDLs based on science. NACWA’s participation also provides a national perspective on the broader implications of the district court’s holding.