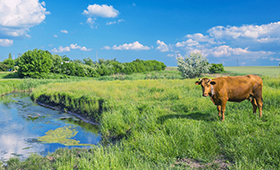 (April 17, 2018) - The House Committee on Agriculture has released its version of the 2018 Farm Bill, which will be marked up by the committee this week.  NACWA has been actively engaged over the past several months with members of both the House and Senate Agriculture Committees to ensure inclusion of NACWA’s priorities under the “Conservation Title” of the Farm Bill, many of which were included in the House bill.

The legislation includes several key changes under the Regional Conservation Partnership Program (RCPP) sought by NACWA that include allowing projects to exceed 5 years to meet the objectives of the program, providing a streamlined application process and an expedited renewal process for projects, and ensuring increased quantification of environmental outcomes. Two new conservation provisions are also established under the Environmental Quality Incentives Program (EQIP) that require precision conservation management planning and cover crops to be included under the program.

The legislation also ensures that at least 10 percent of all conservation program funding, which amounts to $400 million, is used to promote water quality and quantity practices that protect drinking water. This new subsection requires collaboration with community water systems and offers higher payment rates for practices that result in environmental benefits.

Lastly, up to $25 million annually in Conservation Innovation Grants (CIGs) are allowed to be used to enter into “on farm” agreements for conservation innovation trials for approaches including precision agriculture technology and enhanced nutrient management plans.

NACWA’s work has been guided by a Farm Bill working group, which is comprised of Association public agency members with a strong interest in conservation programs. The Senate Agriculture Committee is expected to release their version of the Farm Bill in the coming weeks.  NACWA will continue to work with both the House and Senate to ensure its priorities are included as Congress works to advance a five-year reauthorization of the Farm Bill prior to the September 30 expiration deadline.  For more information on NACWA’s Farm Bill efforts, please contact Jason Isakovic or Kristina Surfus, NACWA’s Legislative Director.