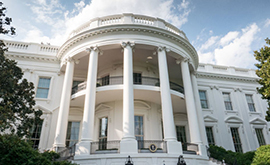 (April 10, 2018) - As controversy continues to roil Washington, DC, infrastructure proponents are looking to re-center attention and debate on the White House’s Infrastructure Plan but continue to encounter road blocks. The lead White House infrastructure advisor, DJ Gribbin, is the latest in a string of resignations over the past several weeks.

During his brief tenure, Gribbin spearheaded the Administration’s efforts on infrastructure, culminating in a proposal of $200 billion in federal funds to stimulate at least $1.5 trillion in infrastructure investments from a range of stakeholders. Although the responsibility of negotiating the infrastructure proposal has shifted to Congress, Gribbin’s departure marks another untimely wrinkle in the push towards a national infrastructure package.

NACWA continues to engage with both the Administration and Congress on advancing some form of an infrastructure bill and is actively exploring legislative options to achieve this goal (see related story).