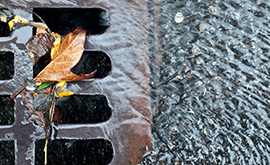 (February 27, 2018) - NACWA submitted comments Feb. 20 on Oregon’s recent draft MS4 Phase II permit.  The Association is concerned that the draft permit would set a dangerous precedent that will have national implications if finalized “as-is.” The draft Phase II MS4 permit fails to mention the maximum extent practicable (MEP) standard uniquely afforded by Congress to MS4 communities. Rather than the MEP standard, the draft permit requires that permittees “not cause or contribute to a violation of a water quality standard.”

NACWA has long supported and defended the Clean Water Act’s MEP standard because it allows greater flexibility for communities to determine and implement the best management practices for their unique geographic, hydrologic, and land-use requirements that define each community’s urban runoff needs.

The Oregon MS4 permit also includes seven “New Registrants” that are first-time permittees that must come into compliance quickly, and to the same extent as more experienced Phase II communities in Oregon. NACWA believes the permit’s “one size fits all” approach fails to consider what is practically achievable for these small communities.

The Oregon Department of Environmental Quality (DEQ) issued their draft MS4 Phase II permit in November 2017, and it was filled with numerous typographical errors that rendered the original permit unclear, inaccurate, and inconsistent. After correcting some of the errors, the DEQ issued a redline draft permit and errata, as well as pushed back the public comment date.

NACWA is working closely with the Oregon Association of Clean Water Agencies (ORACWA) and our members in the state, and urging the DEQ to make revisions to the draft permit to adhere to the federal MEP standard. NACWA sees the Oregon draft MS4 Phase II as another example of the recent trend toward more restrictive, water quality standard-driven approaches for MS4s and a deviation from the traditional MEP standard.