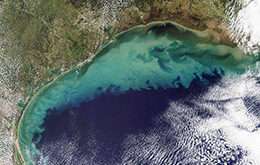 (February 6, 2018) - The Mississippi River/Gulf of Mexico Hypoxia Task Force met from January 31 – February 1, to discuss progress on reducing nutrient loads to the Gulf. David Ross, Assistant Administrator for EPA’s Office of Water, provided opening remarks, noting that nutrient-related issues will be a priority for him as he works to lay out the agenda for his tenure at EPA, which officially began on January 8.

The public portion of the Task Force meeting began with an update on the record-setting size of the hypoxic zone in 2017. With nutrient loads being highly dependent on flow, scientists working with the Task Force continue to develop better ways to track progress on nutrient reductions from year to year, while accounting for fluctuations based on wet and dry precipitation years. The Task Force heard updates on several current initiatives in this area.

In 2016, the Task Force released a report outlining progress made in addressing point source contributions of nutrients, which focused entirely on clean water utilities. The metrics used – the number of treatment plants with requirements to monitor or treat for nitrogen and/or phosphorus – did not tell the entire story, and at the time NACWA criticized the report for not adequately reflecting the significant efforts made by the clean water community. During the February 1 public session, the Task Force’s point source workgroup described a new effort to add a nutrient-loading metric to tracking efforts in future reports.