Supreme Court Rules Waters of the U.S. Challenge be Decided in District Courts 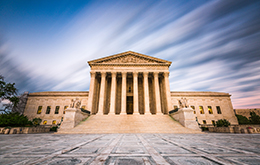 (February 6, 2018) - The US Supreme Court issued a decision in National Association of Manufacturers (NAM) v. EPA on January 22, finding that litigation over the 2015 Clean Water Rule should proceed in the federal district courts, rather than in the US Court of Appeals for the Sixth Circuit.  While this ruling resolves some legal questions involving efforts to clarify Clean Water Act jurisdiction, it will almost certainly lead to additional litigation and the overall question of which waters are jurisdictional under the CWA will likely remain unclear for some time.

The Clean Water Rule, issued by the Obama Administration in an attempt to clarify the application of the Clean Water Act (CWA) to isolated streams and wetlands, was challenged by multiple parties in both federal district and appellate courts throughout the country.  The appellate cases were consolidated in the US Court of Appeals for the Sixth Circuit, and the Supreme Court’s decision resolves the question of which court (or courts) have original jurisdiction over the challenge.  However, the decision does not address the legality of the underling Rule.

EPA had argued that the case should be decided in the court of appeals as the equivalent of either an effluent limitation or a permit issuance under CWA § 509, which provides jurisdiction over certain enumerated actions directly in the circuit courts.  The Supreme Court rejected this decision, finding that the language of the statute clearly does not encompass rulemaking and that the Rule should instead be subject to review in the various districts courts under the Administrative Procedure Act.  This decision also means that challenges to any future rules seeking to clarify CWA jurisdiction must be filed in district courts.

The decision also called into question the application of a national stay of the Rule, issued by the Sixth Circuit holding the Rule in abeyance while the court considered the merits.  With the Supreme Court finding that jurisdiction lies in the district courts, the Sixth Circuit must remove it’s stay.  Anticipating this potential scenario, the Trump Administration issued a proposal in November 2017 to delay the effective date of the Rule.  The proposal was finalized and went into effect today, Feb. 6.

Meanwhile, efforts to repeal and replace the Clean Water Rule have been ongoing, with a proposal to rescind the Rule put forth in July 2017, and comments closing in September 2017.  EPA also hosted a series of public meetings, including a session specifically for Stormwater, Wastewater, and Drinking Water Agencies on November 14, 2017. NACWA participated in this session.

NACWA will continue to track the efforts of the Trump Administration to draft a replacement for the Clean Water Rule and any continuing litigation in the interim.