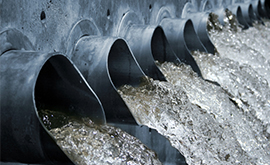 (January 23, 2018) – A document reportedly outlining the White House’s infrastructure plan was leaked to the press this week.  Although the authenticity of the document is still unclear, it purports to show a level of detail that has not previously been shared publicly regarding the Trump Administration’s infrastructure plan.   The White House has declined to make a formal statement on the outline, but President Trump is still expected to formally unveil his plan around the time of the State of the Union address on January 30th.

The outlined plan does not suggest specific funding levels, but calls for several different funding and financing streams to which a variety of sectors, including public water, would compete against one another. These funding streams focus largely on innovative, transformative, and rural projects, and show a clear interest in increasing private sector engagement in local infrastructure – all in line with what the Administration has been suggesting over the past year. The outline also proposes opening the Clean Water State Revolving Fund (CWSRF) to private entities working in the public interest – something which could cause NACWA significant concern without any significant increase in overall SRF funding. Similarly, the outline proposes changes to the Water Infrastructure Finance and Innovation Act (WIFIA) program, including potentially increased funding levels but also increased eligible uses which could reduce overall dollars available for water.

Overall, the released outlined includes little in the way of detail and explanation and appears hastily prepared. While it is generating debate – and NACWA is considering a formal response – it has raised more questions than answers. NACWA will continue working with water sector to advocate for significant increased funding for clean water, and will also continue working with Congress -- which will ultimately determine potential legislative text.  Members with questions can contact Kristina Surfus.