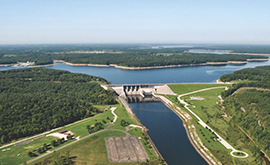 (January 23, 2018) – The Senate Environment and Public Works (EPW) Committee and the House Transportation and Infrastructure Water Resources Subcommittee have held hearings over the last several weeks to discuss ways to improve, modernize, and make more efficient the delivery of Army Corps’ water infrastructure projects.  The hearings provided the committees the opportunity to hear from the Army Corps and stakeholders as Congress begins work on the next Water Resources Development Act (WRDA).  The current WRDA authorization expires on September 30, 2018.

WRDA legislation authorizes major Army Corps water infrastructure projects throughout the country and has a significant impact on advancing the clean water priorities of many NACWA members.  NACWA has worked with Congress in past years to secure inclusion of clean water priorities and enhanced coordination between the Corps’ and municipalities during the Corps’ flood control planning process. The fairly high likelihood of a WRDA bill being signed into law also makes it a potential legislative vehicle for clean water sector priorities. NACWA plans to engage throughout this WRDA process again this Congress, and in follow-up to the recent hearings, NACWA is submitting an “for-the-record” statement to both the House and Senate Committees of Jurisdiction.

During the January 17 EPW hearing, Senator Boozman (R-AR) highlighted the need for increasing the use of innovative funding tools to meet the nation’s water infrastructure needs, including WIFIA. The Corps has an authorization for WIFIA funding which it has not yet developed a structure for, unlike EPA which has implemented a WIFIA program.  When pressed further, Corps witnesses testified that they are working on drafting an updated WIFIA policy and looking to utilize innovative financing tools. NACWA has supported legislation, the Water Infrastructure Finance and Innovation Reauthorization Act of 2017, that would jumpstart the Corps’ WIFIA program by leveraging the EPA WIFIA structure and authorize up to $690 million in overall WIFIA funding over six years. This legislation was recently introduced in the House and is anticipated to be introduced soon in the Senate.