Tax Reform, Government Funding are Priorities as Congress Wraps Up 2017 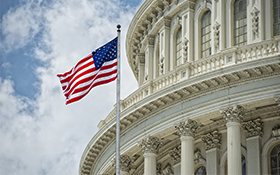 (December 19, 2017) - Federal tax reform continued its rapid advance last week, as Congressional negotiators “conferenced” the distinct House and Senate bills, which passed in each respective chamber.  By Friday afternoon, Republican leadership announced that a deal had been reached that would allow them to proceed to a final vote on a conference package.  Votes in both the House and Senate are expected on the final in the next few days, and President Trump is expected to quickly sign it into law.

As reported throughout the year, NACWA has been closely engaged in tax reform discussions with the advocacy goal of preserving tax-exempt municipal bonds. Critically, the tax-exemption for municipal bonds will be maintained, but will not end for advance refunding bonds issued after December 31, 2017. Despite a push by NACWA and other stakeholders to maintain advance refunding, the final package negotiated by the House and Senate will eliminate the allowance under current tax law for one tax-exempt advance refunding.  Other changes included in the final tax package, such as new limitations on state and local tax deductibility, will undoubtedly also impact many municipalities as well, and these details will continue to develop as state and local governments begin analyzing the final bill.

Overall, the final tax reform package covers over 1,000 pages and allows for a $1.5 trillion reduction in revenue over 10 years – raising concern that the bill will increase pressure to cut federal spending in coming years for critical areas such as infrastructure. While there was initially a push to pair tax reform with infrastructure investment, the two were unfortunately decoupled, with infrastructure being postponed to 2018.

On the appropriations front, it seems likely that Congress will pass another short-term funding bill this week to keep the government operational until January 19, 2018.  This will give Congress further time after the holiday break to work out a potential budget and spending deal to fund the government through the remainder of the fiscal year on September 30, 2018.  Current federal funding is set to expire on December 22.  NACWA is continuing to advocate to Representatives and Senators on the need for a full year budget deal that includes increased funding for Clean Water State Revolving Fund (CWSRF) and other water infrastructure programs.