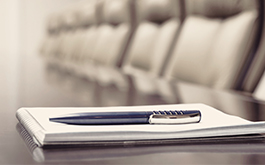 (November 21, 2017) – NACWA met with senior officials from EPA’s Office of Policy on Nov. 20 to discuss the Association’s comments on the Agency’s regulatory reform initiative.  Samantha Dravis, the Associate Administrator of the Office of Policy, led the meeting, and a number of senior members from the Office of Wastewater Management (OWM) were present as well.  Dravis also serves as the lead official for EPA’s regulatory reform efforts.

NACWA focused on key themes outlined in the Association’s regulatory reform comments, including the value of prioritizing compliance assistance over formal enforcement actions, the need for continued emphasis on integrated planning and affordability issues, and the importance of greater consistency among EPA’s regional offices.  EPA staff were receptive to NACWA’s comments, especially related to affordability concerns – including the need to update EPA’s 1997 Financial Capability Guidance – and advancing integrated planning.  OWM staff present noted that they are reviewing recommendations from the recent National Academy of Public Administration (NAPA) report on affordability and have established a workgroup to further study its suggestions.

EPA continues to review all of the public comments it received around its regulatory reform efforts and anticipates moving forward with specific actions over the next year.  NACWA will continue to stay in close contact with Agency on this topic and report on any developments.  Members with questions can contact Chris Hornback, NACWA’s Chief Technical Officer.