While traditionally centered on industrial facility siting, environmental justice concerns have become particularly salient in the clean water sector in the wake of the Flint water crisis and extreme stormwater events.  Many NACWA members are on the front-line promoting an expanded definition of environmental justice, which is proactive, community-driven, and integrated into the utility’s business model. The Louisville Metropolitan Sewer District (MSD) is engaging with this new outlook by collaborating with stakeholders on several projects that not only reduce hazards from CSO’s and flooding, but also provide tangible community benefits. 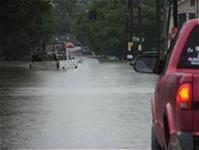 The Maple Street Land Use Planning Project had its genesis in a 2009 extreme flooding incident, where the city received 7.5 inches of rainfall in a mere 75 minutes. Working with the Federal Emergency Management Agency (FEMA), Louisville MSD matched grants to purchase private property and work to make the area less flood-prone. As part of this improvement initiative, the project includes extensive public outreach and the formation of the Future Advisory Committee. This committee helps organize the community and identify long-term uses for the vacant land, such as athletic fields, greenspace, or community gardens.

Similar in its approach, the Southwestern Parkway CSO Storage Basin Project utilizes a system of public outreach to achieve its goals. By situating a 20-million-gallon storage tank under a valuable community asset, Louisville MSD will reduce stormwater runoff into the Ohio River, while improving a local park. In addition to the storage facility, Louisville MSD plans to make significant improvements to Shawnee Park by improving landscaping, restoring athletic courts, and constructing a pavilion.

Despite facing opposition from interest groups, Louisville MSD circumvented this criticism by including community groups and creating steering committees from the beginning of these projects. This type of engagement not only improves the environmental and public health of the community, but also builds on the trust already established between ratepayers and utility.

NACWA is proud to feature Louisville MSD and these projects in its report, Opportunities for Municipal Clean Water Utilities to Advance Environmental Justice & Community Service, which includes success stories from utilities across the country. Congratulations to Louisville MSD on their achievements and we look forward to the future of these projects.