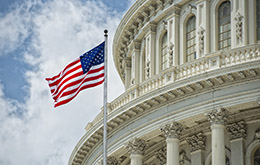 (October 31, 2017) - The Senate passed a $36.5 billion Disaster Relief bill last week, which had previously passed out of the House, to fund recovery efforts for Hurricanes Harvey, Irma and Maria, as well as the western wildfires.  The bill represents the second phase of relief spending to address these disasters, and includes $18.7 billion for FEMA’s Disaster Relief Fund, $16 billion in debt relief for the National Flood Insurance Program and $577 million for wildfires.  Congress anticipates working on a third legislative package to address outstanding disaster needs before the end of the year.

Congress also passed a Fiscal Year 2018 (FY18) Budget Resolution last week, reportedly setting the stage for tax reform.  While FY18 is already underway, passage of an identical budget in both the House and Senate was a key procedural step that Senate Republicans needed in order to fast-track tax reform with a simple majority, rather than 60 votes, which would necessitate support from Democratic Senators.  While the House passed a FY18 Budget Resolution this summer that would have required a deficit-neutral tax plan, the Resolution that the Senate passed – and which the House agreed to this week – allows tax reform to add $1.5 trillion to the federal deficit.

Tax reform has now become priority number one for the Administration and Congressional Republicans.  On Wednesday, November 1, House Republicans are expected to release their much-anticipated tax package and start racing to pass tax reform by the end of the year.  NACWA remains primarily concerned about preserving the current tax exemption for municipal bonds – a critical financing tool for water and wastewater – which despite a major outpouring of support, remains vulnerable to changes as Congress seeks “pay-fors” to balance other tax cuts.  After the House plan is released, NACWA plans to keep members informed by providing additional details in next week’s issue of the Current.