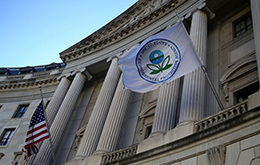 (October 24, 2017) - NACWA’s State Revolving Fund (SRF) Workgroup met last week to further discuss the Association’s engagement with EPA to provide suggestions on streamlining the SRF application and reporting process.  The Workgroup was formed earlier this year in response to NACWA’s inclusion of reforms to the SRF program as part of the Association’s overall regulatory improvement agenda.

The Workgroup has developed a list of suggested SRF streamlining idea, and has had a number of calls with EPA over the last few months to discuss those ideas.  EPA is currently pursuing its own internal review of the SRF program and looking for streamlining opportunities, so NACWA’s efforts are coming at a good time.  The calls with EPA have been productive and the Agency is open to NACWA’s suggestions.

Over the next few weeks, NACWA will be taking its streamlining suggestions and converting them into a formal written document for EPA’s consideration.  The Agency is planning to complete its own internal review in the early part of 2018, and NACWA will stay engaged with EPA staff as that process unfolds.  NACWA is also looking at engaging state officials on this issue, as many SRF requirements that utilities find most burdensome are imposed by individual states, not the federal government.

Any NACWA members with questions about the Association’s SRF streamlining efforts can contact Nathan Gardner-Andrews, the NACWA’s Chief Advocacy Officer.