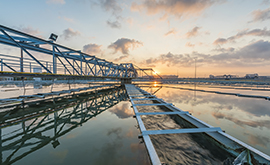 (October 24, 2017) - The National Emission Standards for Hazardous Air Pollutants: Publicly Owned Treatment Works (POTW NESHAP) was finalized by EPA on October 16, and the final rule reflects the advocacy efforts of NACWA and its members.  A pre-publication version of the rule is now available, which includes all the major changes to the proposed rule that were previously requested by NACWA in its comments.  Some of EPA’s proposed changes could have increased the number of POTW’s subject to the rule and compliance costs, but NACWA successfully minimized the impacts to the municipal clean water community.

NACWA was most concerned about a clarification in the proposed NESHAP that hazardous air pollutant (HAP) emissions from collection systems should be included when determining if a POTW is a major source of HAP.  EPA stated in the final rule that it was not making a final determination on inclusion of collection system emissions at this time.  EPA also did not make a final determination on pretreatment standards to limit emissions or establishing emission fraction criteria for existing POTWs.

Although EPA believes that the rule currently applies to only 13 POTWs, all clean water agencies should evaluate the rule’s applicability to their facilities. More details about the final rule are provided in Advocacy Alert 17-06.

NACWA members with questions or comments about the POTW NESHAP should contact Cynthia Finley, NACWA’s Director of Regulatory Affairs.