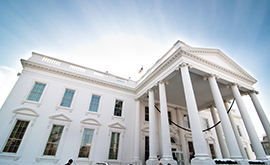 (October 10, 2017) – NACWA has been busy in recent days meeting with EPA and the White House to discuss the importance of water infrastructure funding.

NACWA staff met with the Office of Water’s (OW) Deputy Assistant Administrator, Lee Forsgren, on October 5 to discuss the Association’s priority issues. Currently the top political official in OW, Forsgren has been active over the past several weeks, representing the Agency while the nomination of David Ross to be Assistant Administrator for Water continues to work its way through the Senate.

Consistent with the letter NACWA sent to President-Elect Trump late last year, NACWA stressed the importance of increased federal funding for water infrastructure and continued support for the Clean Water State Revolving Fund, as well as the importance of addressing the growing challenges related to affordability, and providing assistance to low income customers as rates continue to increase. NACWA also highlighted its comments on the Agency’s regulatory improvement efforts, stressing the need to increasingly work with the clean water community as partners and to focus on compliance assistance rather than using an enforcement-first approach with utilities.

While Forsgren noted that work on the Waters of the United States rule will consume much of the Agency’s time in the coming months, there is interest in working with the clean water community on areas including wet weather and nutrients.  The Agency is also interested in continuing to bolster the sector’s ability to respond to crises like the recent hurricanes, and in evaluating how best to effectively combat the workforce challenges facing our community.

Also on the infrastructure front, NACWA and several of its Board Members and other water sector stakeholders participated in a meeting on October 10, with key White House officials including, DJ Gribbin of the National Economic Council, EPA Administrator Scott Pruitt, and Alex Hergott with the Council on Environmental Quality, to discuss the role of water in the pending White House infrastructure package. This is the first such meeting devoted entirely to water infrastructure, and NACWA will provide additional details to the membership in the next Clean Water Current.

In related developments at EPA, as the Office of Water awaits the confirmation of David Ross, it has moved to backfill the vacancy left by Betsy Southerland’s retirement over the summer. Deborah Nagle, with whom NACWA has worked closely in her role as Water Permits Division Director, was named the Acting Director of the Office of Science and Technology effective October 2. NACWA looks forward to working with Deborah in her new role overseeing the water office’s work on water quality criteria development and implementation, the effluent guidelines program and more.