Camden County MUA Moves To Be Energy Independent by 2019 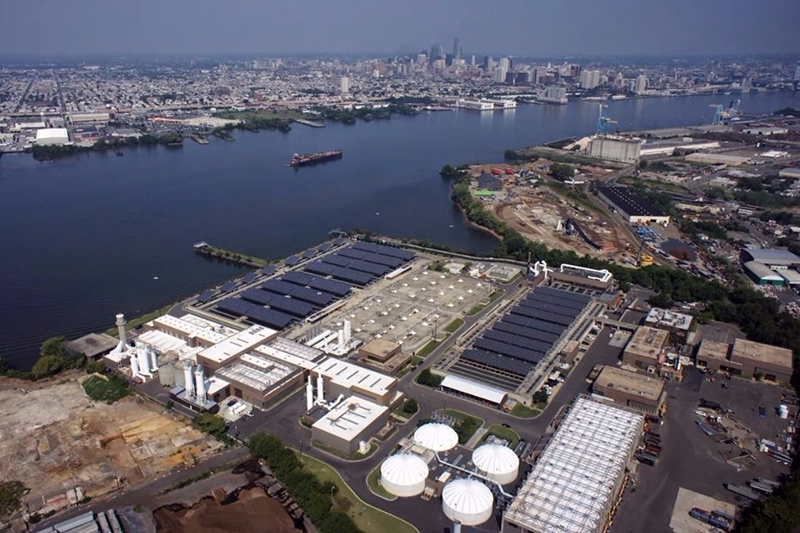 
Solar panels are seen from the rooftop of the Camden County MUA building, in Camden, N.J. CCMUA will be the first municipal utilities authority in the state to become energy independent, with two, 2-megawatt solar arrays and other green energy sources on the roof of its Camden facility.

NACWA member agency, Camden County Municipal Utilities Authority (CCMUA), is putting strong action into its bold goal to be energy independent by 2019. CCMUA Director and NACWA Board member Andy Kricun, together with state Bureau of Public Utilities commissioner Dianne Solomon and county freeholders Jeffrey Nash and Jonathan Young, offered a three-pronged vision for making the utility “greener,” thus improving operations, as well as its sustainability and overall environmental impact.  The move is also reportedly improving relationships with the public.

"The entire goal is to minimize the impact on the neighborhood," said Kricun, as officials announced a plan to create a "micro-grid" complete with solar panels and a mutually beneficial agreement with the Covanta Camden Energy Recovery Center to exchange wastewater for energy.

In addition, the county will add $30 million sludge "digesters" that will reduce biosolid waste, desiccating it and feeding the remaining gasses into turbines to be converted to energy. Once dried out, the remaining solid waste would be a fraction of what it was before, reducing the amount released into the environment.  The end goal: to make the facility energy independent by 2019, Nash said — the first such facility in the state.

The digesters will be paid for with a low-interest loan from the EPA, saving about $1 million a year, Nash noted.

The CCMUA will send 1 million gallons of treated effluent for cooling, while Covanta will provide electricity generated by its plant back to the CCMUA.

A longer-term benefit of the project: Officials believe that in severe weather events such as Superstorm Sandy that have potential to knock wastewater plants offline, the CCMUA facility will remain operational.