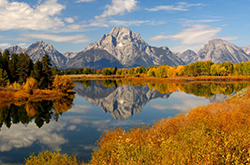 (September 19, 2017) - NACWA participated last week at the Environmental Council of States’ (ECOS) 2017 Fall Meeting in Jackson Hole, WY. ECOS is an association that represents the state environmental department heads who oversee state environmental programs, including states that have delegated authority under the Clean Water Act. Much of the conference centered around developing workable principles of cooperative federalism and how the current Administration is seeking to vest more authority in the states, as opposed to in EPA Regions or Headquarters.

Jim McQuarrie, Chief Innovation Officer with NACWA Member, the Denver Metro Wastewater Reclamation District, represented the Association at the meeting and underscored the need to include municipal clean water agencies as key partners in any definition of cooperative federalism and explained the innovative and collaborative approaches that are re-defining the clean water sector.  NACWA believes there is great opportunity in trying to change the perception of the water sector from being a “regulated industry” to one that is viewed as a co-equal sector, along with states and the Federal Government, of public servants carrying out the mission of the cleaning and protecting the nation’s treasured waterways.