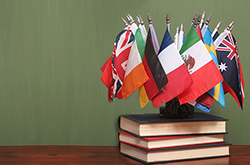 The International Water Services Flushability Group (IWSFG) is meeting this week to consider public comments received on the IWSFG draft flushability standard.  The IWSFG is an international group of wastewater utilities and the associations representing them that share a common goal of reducing the problems caused by the inappropriate flushing of consumer products, including wipes.

NACWA has participated in the development of the draft flushability standard, which will ensure that any product meeting the standard is safe to flush into municipal wastewater utility systems.  The Association is represented at the meeting by Frank Dick, Wastewater Engineering Supervisor at City of Vancouver Public Works and Chair of the NACWA Pretreatment & Pollution Prevention Committee, and Rob Villee, Executive Director of the Plainfield Area Regional Sewerage Authority (PARSA).

NACWA is the U.S. voting member of the IWSFG, and other countries represented include Japan, Spain, Australia, Canada, and New Zealand.  Individual utilities are also encouraged to join the IWSFG as non-voting members by signing the IWSFG Memorandum of Understanding.   The IWSFG standard will be finalized later this fall, which will assist in NACWA’s efforts to promote state legislation dealing with wipes.