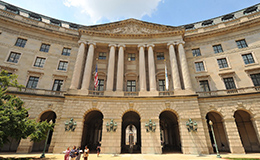 Susan Bodine, the nominee to head EPA’s enforcement office, is now working as an advisor at EPA on enforcement issues pending Senate confirmation.  Bodine was approved by the Senate Environment & Public Works Committee on July 12, but the nomination has not yet been considered by the full Senate.  Bodine will work closely with the current acting head of the enforcement office while awaiting Senate action.  She is also expected to work closely with David Ross, the nominee to head the Office of Water (see related story above), once he officially begins his duties at the Agency.

The Trump Administration also recently announced two leadership appointments in EPA’s regional offices.  Cathy Stepp, currently the head of the Wisconsin Department of Natural Resources, will be the principal deputy administrator for the Region 7 office, which is based outside Kansas City, Kansas, and responsible for Missouri, Kansas, Nebraska and Iowa.  As the highest-ranking official at the Kansas City office, Stepp will serve as acting administrator until EPA Administrator Scott Pruitt appoints a regional administrator.

Trey Glenn of Alabama has been appointed Regional Administrator for EPA Region 4, which encompasses Alabama, Florida, Georgia, Kentucky, Mississippi, North Carolina, South Carolina, and Tennessee.  Mr. Glenn served as director of the Alabama Department of Environmental Management from 2005 – 2009, and as division director for the Alabama Office of Water Resources from 2001- 2005.  Most recently, Mr. Glenn has been working as an independent engineering consultant and business owner, focused on environmental issues.