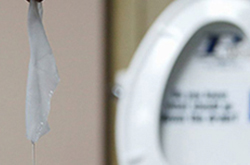 During the House Appropriations Full Committee’s consideration of the FY 2018 Financial Services & General Government Subcommittee bill on July 13, Rep. Andy Harris (R-MD) introduced, but immediately withdrew, an amendment which would prohibit the District of Columbia from spending any money to implement DC’s Nonwoven Disposable Products Act of 2016, the first wipes law passed in the US.  Prohibiting the expenditure of any DC funds on the bill would effectively end implementation of the law.

Keeping the wipes amendment off the Financial Services & General Government bill is a big win for the clean water sector.  As NACWA explained in a letter to Congress, the Association strongly support this local law to protect sewer systems.  An amendment negating DC’s law would put Congress on the record regarding wipes laws and could deter future efforts at local, state, or federal levels.  This effort is attracting significant coverage including articles in the Washington Post and Roll Call.

NACWA, the Water Environment Federation (WEF), NACWA Member Agency DC Water, and Eleanor Holmes Norton (D-DC), the District of Columbia’s non-voting member in the House of Representatives, have been working together to defend DC’s law against lobbying from the wipes industry. The DC law requires that non-flushable wipes be clearly labeled “do not flush” and that flushable wipes be safe for sewer systems. To implement the law, DC’s Department of Energy and Environment (DOEE) is working to set its regulations by the end of this year and has involved NACWA and the wipes industry during the regulatory process.

Rep. Harris indicated that he decided to withdraw his amendment because DOEE has not set the flushability standards yet, and he asked that the committee work with the DC Council to set an appropriate standard.  Rep. Harris also cited a New York City Department of Environmental Protection (NYCDEP) study on wipes that he said showed that only 2 percent of materials found in the system were flushable wipes.  NYCDEP has written a letter explaining that this study has “significant limitations in the overall context of the City’s vast wastewater treatment infrastructure,”  since the study consisted of an analysis of two five-gallon containers of debris from a system that treats 1.3 billion gallons of wastewater every day, and it was conducted in a combined sewer system after a heavy rainfall.

Although an amendment was not added at the Committee level, it is possible that the rider could resurface when the bill is considered on the House floor. The Senate may also consider a similar provision to their bill, which has not yet been released. Given this ongoing threat, NACWA encourages its members to contact their Senators to inform them about wipes issue in their home state/district, and to support DC’s law.  See NACWA’s Toilets Are Not Trashcans page for more information.