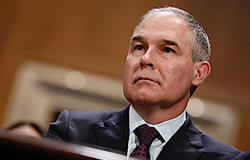 EPA Administrator Scott Pruitt sought to defend the Administration’s proposed EPA budget last week as he testified before the House Interior, Environment, and Related Agencies Appropriations subcommittee. Facing bipartisan resistance to the historic 30 percent cuts to the EPA proposed by President Trump, Pruitt emphasized his intent to make the agency more efficient, and to pivot to its “core mission” of protecting the environment through a system of cooperative federalism.

However, many members of the subcommittee were not convinced. One proposed cut that drew particular ire from several subcommittee members is the elimination of funding for EPA’s geographic programs.

The Administrator also faced pointed questioning on climate change. Democratic members of the subcommittee condemned the EPA for diverting attention and funding for climate science. Other Republican lawmakers praised the Administration’s recent decision to remove the United States from the Paris Climate Agreement.

The President’s budget is traditionally a guidance document to aid Congress in making funding decisions. During the hearing, many lawmakers on the subcommittee from both parties suggested that they support greater funding for the EPA than stipulated in the President’s budget request.

NACWA is working actively to defend key programs such as infrastructure funding and support of geographic watershed programs, and appreciates the bipartisan interest from Congress in these important items.  The Association will continue its aggressive advocacy in this area.