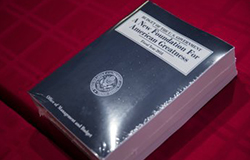 The White House released its full Fiscal Year 2018 (FY18) Budget Proposal earlier this morning. Today’s release builds upon the “skinny” FY18 proposal released by the Trump Administration back in March, which proposed significant cuts to EPA. NACWA is currently reviewing the full proposal and will provide an analysis of its impact to the municipal clean water sector in the coming days.  Additional details regarding President Trump’s infrastructure investment plan are also expected this week, and NACWA will provide an analysis of that proposal as well.

As more information comes out regarding the budget, it’s important to remember that the President’s Budget Proposal is just that: a proposal. The work now shifts to Congress to craft a FY18 spending package, which ultimately tends to vary significantly from the President’s proposal. NACWA will be closely involved with conversations between the White House and Congress regarding both the budget and any infrastructure package over the coming months.  Stay tuned for more information or contact Kristina Surfus, NACWA’s Legislative Director.