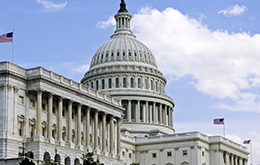 Congress returned to Washington, DC April 24 to face a looming deadline, as the Continuing Resolution currently funding the government will expire on April 28. With several days to go, it appears another short-term spending bill may prevail, avoiding a shutdown but also pushing difficult funding decisions further down the road. The Administration and Congressional Republicans are also continuing work on contentious priorities including health care, sanctuary cities and the border wall, which could stymie smooth progress on a funding deal that would require Democratic support.

Meanwhile, Congress is also facing pressure to not only wrap up Fiscal Year 2017 (FY17) funding but also address FY18. In the coming weeks, NACWA expects to see a more detailed FY18 budget from the President, and continued work on Appropriations bills. NACWA also anticipates additional attention and proposals on tax reform and an infrastructure package, though a clear path forward on these issues has still not emerged.

NACWA will continue to push for strong funding for the State Revolving Funds as well as preservation of funding for important geographic watershed programs and nonpoint source control programs as part of FY18 budget discussions.  For more information on the legislative front, please contact Kristina Surfus, NACWA’s Legislative Director.