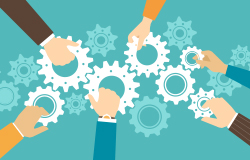 Nearly a decade after NACWA—with a coalition of five other water sector organizations—and EPA first established the Ten Attributes of an Effectively Managed Utility and Five Keys to Management Success, an expanded ten-partner coalition has come together and updated the Effective Utility Management (EUM) Framework and Primer.  The Primer, which is intended to be the starting point for utilities interested in implementing the EUM attributes, was updated to reflect recent developments, including initiatives like the Utility of the Future.  NACWA extends its appreciation to Board Members Diane Taniguchi-Dennis, Deputy General Manager of Clean Water Services and Tom Sigmund, Executive Director of NEW Water, who represented NACWA on this effort, as well as the rest of the members of the steering committee that oversaw the update of the Primer.