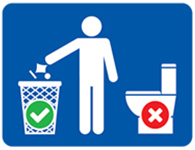 (April 2, 2019) - The first regulation of flushable wipes in the U.S. has been proposed by the District of Columbia (DC) Department of Energy and the Environment (DOEE).  DOEE was required to develop these regulations by the District’s wipes labeling law, the Nonwoven Disposable Products Act of 2016.

The proposal sets standards that wipes must meet to be labeled “flushable” and requires that non-flushable wipes be labeled with a statement that they are not flushable and the INDA “Do Not Flush” logo.  Parts of the proposed flushability standards are based on the International Water Services Flushability Group (IWSFG) flushability specifications, which NACWA helped to develop with other clean water associations.

The regulation’s requirements for the “Do Not Flush” logo are based on the 2nd Edition INDA Code of Practice: Communicating Appropriate Disposal Pathways for Nonwoven Wipes to Protect Wastewater Systems (COP).  NACWA, INDA, the Water Environment Federation (WEF), the American Public Works Association (APWA), and the Canadian Water & Wastewater Association (CWWA) collaborated on the COP, to help ensure that non-flushable wipes are appropriately labeled.  The COP is voluntary, and the DC law and regulations are the first attempt to mandate this labeling on baby wipes, cleaning wipes, and other wipes that have a high likelihood of being flushed.

The Kimberly-Clark Corporation filed a lawsuit in 2017 to challenge the DC wipes law, and a judge with the federal District Court for the District of Columbia granted a Motion for Preliminary Injunction, finding that the law could violate Kimberly-Clark’s First Amendment rights.  The court suggested that the labeling requirements of the Act could be modified to be more factual, rather than a simple “Do Not Flush” instruction, which would make them less susceptible to First Amendment challenge.  The court also acknowledged that DC’s rulemaking process to implement the Act could allow tailoring of the Act’s requirements in a way that would not violate Kimberly-Clark’s First Amendment rights.

Public comments are being accepted on the proposed regulations through April 14.  NACWA is reviewing the regulations and will submit comments as part of its ongoing Toilets Are Not Trashcans campaign.  NACWA members with questions or comments about the regulations should contact Cynthia Finley .