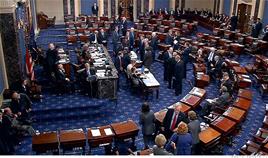 The Senate returns to Washington DC this week—following an abbreviated one-week August recess—to a full slate of work for the remaining few months of the 115th Congress and with November midterm elections pre-occupying the minds of many Congressional Members.

The Senate intends to focus on considering judicial nominations, and on working to wrap up several priority pieces of legislation that need to be conferenced with the House. Meanwhile, the House remains on recess through Labor Day. Where bills already passed by the House and Senate need to be reconciled, congressional staff are working to iron out differences while Members of Congress are away.

A top priority for Congress this fall is to finish work on the Fiscal Year 2019 (FY19) federal spending bills before the fiscal year ends. Both parties are interested in avoiding another huge short-term spending bill – or threat of a government shutdown – on September 30. Other major legislative priorities include passing a 2018 Farm Bill before the current authorizations expire on September 30. If differences cannot be resolved between the House and Senate bills by then, a short-term extension is likely.

Similarly, Congress is working to pass a 2018 Water Resources Development Act (WRDA) bill by the September 30 deadline as well. The Senate’s WRDA bill still needs to be passed on the Senate floor before it can be conferenced with the “much slimmer” House-passed version. NACWA hopes that the Senate can pass its WRDA bill in the very near future.

Between FY19 funding, WRDA, and the Farm Bill, clean water policies and funding will remain a hot topic through the close of this Congress. NACWA staff will remain closely engaged and keep NACWA membership informed of any updates and opportunities to engage.