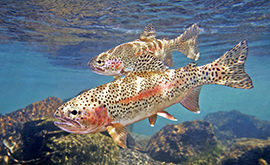 (February 27, 2018) - The U.S. Supreme Court denied certiorari in Catskill Mountains Chapter of Trout Unlimited Inc. v. EPA on Feb. 26, in effect upholding EPA’s Water Transfers Rule and providing a key legal victory for the water sector.  The petition arose from a January 18, 2017 decision of U.S. Court of Appeals for the Second Circuit upholding the rule after a federal district court decision vacated key portions of the rule.

The Water Transfers Rule exempts transfers of natural, untreated water for purposes of water supply or flood control from regulation under the National Pollutant Discharge Elimination System (NPDES) program, which the Second Circuit concluded represents a reasonable interpretation of the Clean Water Act.  As the court explained, the CWA does not clearly contemplate inclusion of transfers of untreated waters in the NPDES permit program, and reasonable alternatives exist at both the state and federal levels to address any pollution concerns associated with the transfers.

In September 2014, NACWA filed an amicus curiae brief  with the Second Circuit as part of a coalition of entities representing the municipal water sector.  The brief highlighted the significant operational and regulatory challenges that permitting of water transfers would present to NACWA member utilities and argued that the NPDES program is the wrong tool to regulate such transfers.  The joint brief suggested that other approaches such as federal drinking water requirements, the Total Maximum Daily Load (TMDL) program, and state regulations are better suited to address concerns over water transfers.

The Supreme Court’s decision not to review the case essentially affirms the Second Circuit’s ruling and ensures that the Water Transfers Rule will stand.  NACWA is pleased with the Court’s ruling, as the Rule provides important regulatory flexibilities to water and clean water utilities.