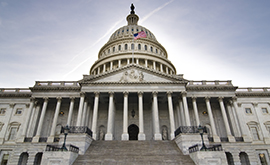 (February 27, 2018) - NACWA is pleased to see the recent introduction a bill to reinstate tax-exempt advance refunding bonds (H.R 5003). As previously reported in the Current, the comprehensive federal tax reform package that was signed into law on December 2017 had eliminated the option to advance refund tax-exempt municipal bonds -- an ability that many utilities previously leveraged to reduce financing costs. H.R. 5003 has bipartisan support led by Reps. Hultgren (R-IL) and Ruppersberger (D-MD), leaders of the Municipal Finance Caucus.  NACWA will continue to work with other bond issuer groups concerned about advance refunding to look for an opportunity to advance this bill through infrastructure and tax conversations this year.