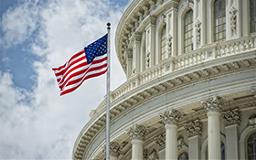 (February 20, 2018) – NACWA sent a letter to House and Senate Appropriations leadership Feb. 15 requesting that strong Fiscal Year (FY) 2018 funding be allocated to the Interior & Environment Appropriations Subcommittee, which funds core clean water programs at the U.S. EPA including the State Revolving Funds, WIFIA, and related programs. This letter follows the sweeping February 8th budget deal, reported on in last week’s Current, which avoided a federal shutdown and increased the discretionary federal spending caps for domestic and defense programs over the next two fiscal years.

Under the budget deal, domestic spending will increase by $63 billion overall over Fiscal Year 2018. During negotiations, Congressional leaders committed to allocate $20 billion of that increase to infrastructure—but did not provide additional direction into which agencies and programs the funds would be funneled. In light of these developments, NACWA sent up its letter as Congressional leaders determine how to allocate the additional spending among the various subcommittees. NACWA will continue advocating for strong FY18 clean water infrastructure funding as the Appropriations Subcommittee work advances in coming weeks. Contact Kristina Surfus, NACWA’s Legislative Director, with any questions or to discuss.