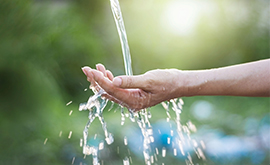 Last week, NACWA joined the Water Environment Federation (WEF), Association of Metropolitan Water Agencies (AMWA), and American Water Works Association (AWWA) in a letter of support for legislation introduced in the House of Representatives to reauthorize the EPA’s WIFIA Program, and jump-start the U.S. Army Corps’ implementation of its own WIFIA Program. The bipartisan legislation, the WIFIA Reauthorization Act of 2017 (H.R. 4492), was introduced by Rep. Mast (R-FL) with co-sponsorship from Reps. Maloney (D-NY), Gibbs (R-OH), and Brownley (D-CA).

WIFIA is currently authorized through 2019.  The Act would authorize the program for another five years, and seeks to double total WIFIA funding. It would also jump-start implementation of the Corps’ WIFIA program, which has been authorized for several years but has not yet gotten off the ground, by running the application and review process through EPA’s established WIFIA office. This proposal is aimed at reducing duplicative efforts with regard to WIFIA while maintaining the Corp’s oversight over its projects. The water sector will be working with the Senate toward introduction of similar legislation, and will keep members informed if the bills advance to a hearing.