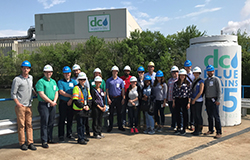 As part of a continued effort to enhance positive networking and goodwill among government and the water sector, congressional staffers, along with NACWA staff, toured DC Water’s Blue Plains Wastewater Treatment Facility—the world’s largest treatment plant of its kind—on April 21. The tour was led by DC Water’s Director of Clean Water & Technology, Christine deBarbadillo, and Communications & Government Relations Manager, Vincent Morris. After a brief history of Blue Plains, staffers donned the signature hardhats and set off around the sprawling facility.

Mirroring the progression of the Blue Plains facility, the tour started with clarifiers and moved steadily towards DC Water’s more recent projects. After proceeding through the rows of secondary sedimentation basins, the group arrived at the denitrification area, where participants were briefed on the process.

After a brief photo stop along the Potomac River, guests viewed the new, state-of-the-art Cambi system. The waste-to-energy project produces a net 10 megawatts of electricity from the wastewater process, which in turn powers about one-third of the Blue Plains facility. Finally, the tour wrapped up by showcasing DC Water’s certified biosolid, Bloom, which serves as a soil amendment for large-scale buyers.

NACWA appreciates all those in attendance, and thanks DC Water for hosting the tour with outstanding hospitality. If you would like to see more pictures from the tour, check out NACWA’s Facebook and Twitter feed!