MR. CAN Protects Narragansett Bay from The Grease Beasts 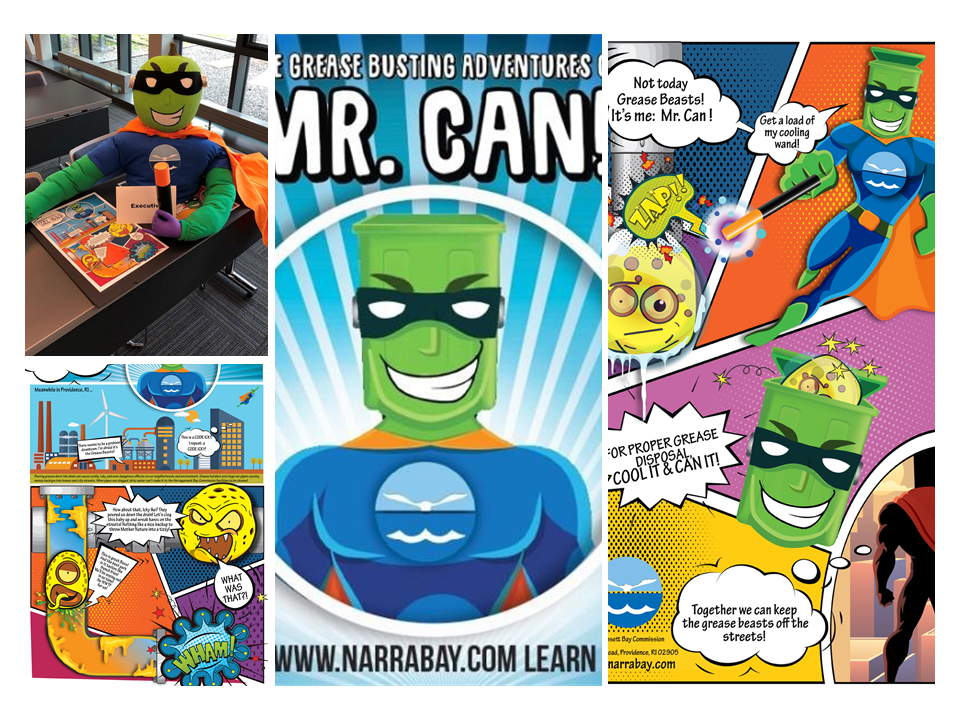 “Deep beneath the streets of Providence, blobs of fats, oils, and grease, known as the Grease Beasts, conspire to clog the city’s sewers and create nasty overflows into local streets and homes. Under their evil leader, Icky Ike, these lardaceous villains run amok until they meet MR. CAN, the Narragansett Bay Commission’s grease-fighting superhero. With his cooling wand, MR. CAN solidifies the Grease Beasts and disposes of them in his trash can head. MR. CAN saves the day and protects clean water while encouraging all of us to “cool it and can it.”

This story line is the centerpiece of the Narragansett Bay Commission’s (NBC) education program, MR. CAN vs The Grease Beasts.

Conceived jointly by the NBC’s Pretreatment and Public Affairs departments and brought to life by animator and graphic artist Rafael Cuello, the program aims to educate the public about proper household grease disposal. In the 2017-2018 school year, MR. CAN and his message were integrated into the curriculum of the NBC’s award-winning environmental education program, The NBC Watershed Explorers, which reaches some of the most economically-disadvantaged students in Rhode Island, and in educational outreach to the Boys & Girls Clubs of Rhode Island. The lesson complements existing NBC educational messages regarding disposable wipes and other items that shouldn’t go down the toilet or the drain. MR. CAN’s animated video also greets visitors at the NBC’s two wastewater treatment facilities and his message is incorporated into WWTF tours.

MR. CAN was inspired by other creative FOG campaigns from fellow NACWA members and received its own recognition with a 2018 National Environmental Achievement Award.

To see MR. CAN in action be sure to visit: